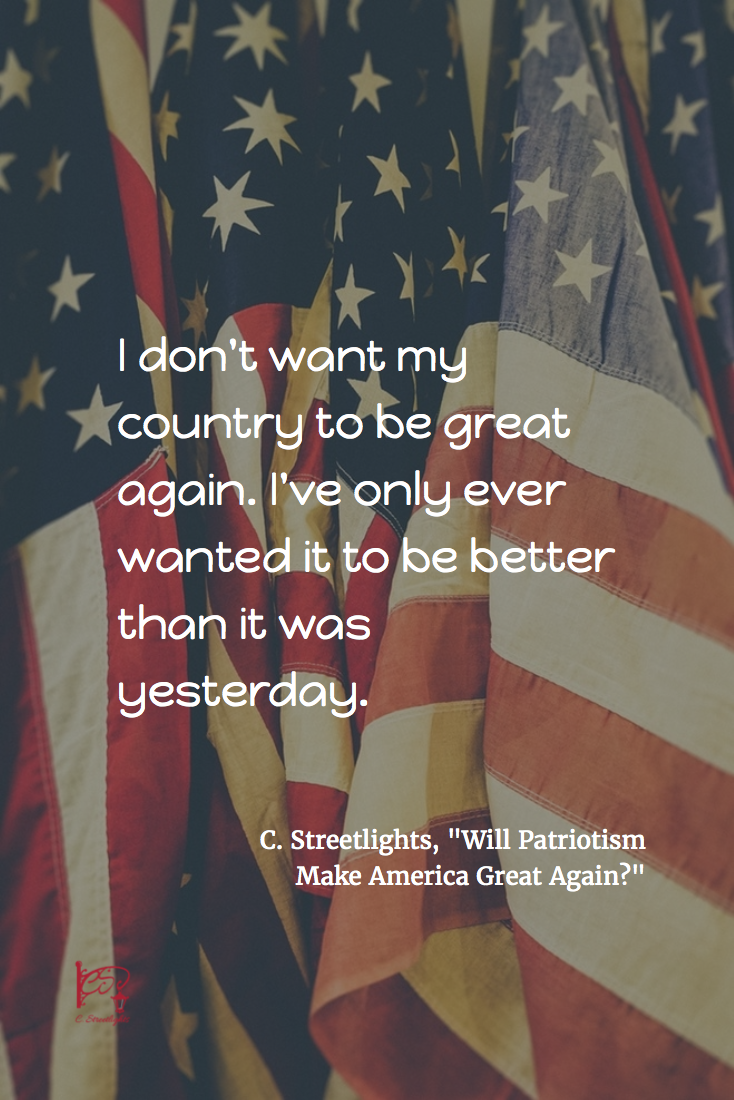 The concept of patriotism is one that has evolved for me over time. It was easy for me to define when I was younger. To be patriotic meant to be proud of my country and to defend it against ideals that would cause it harm. I grew up in a staunchly Republican family, back when the GOP was a different party than what it is now. I don’t know what that means even now, I just feel what it means and know it be true. I have early memories of going with my mother to the polling station — one time in my friend’s garage — and standing close to my mother in a curtained booth while she voted. My grandfather had a flag pole installed in his front yard at the request of my grandmother for their 30th wedding anniversary, and he flew a flag everyday. Pride in our country was part of our family’s identity.

My childhood town is a military town. We have the United States Army, Navy, and Marines in my hometown alone while the National Guard is just a stone’s throw away. To say military was a strange juxtaposition with the surfers and beach combers would be an understatement. Somehow, the strange cultural fabric wove itself into pattern of camouflage and fluorescent Quicksilver with OP fringe.

Patriotism was never second guessed. My friends and I loved our country, and while I don’t remember a time, we wouldn’t think to criticize it, either.

Election seasons were less hostile then. I might be reminiscing with a bit of rose tint, but the first election cycle I have a memory of is the Bush/Dukakis Election (1988) when Bernard Shaw asked the shocking debate question regarding Kitty Dukakis and the death penalty. I was in 7th grade at the time and the general consensus was Shaw’s question was out of line and lacking decorum. It seemed that if a debate question wouldn’t produce a conversation about a candidate’s platform, it shouldn’t be asked. It’s almost a full 20 years later and debates have disintegrated into traveling carnival shows.

No longer a member of the Republican Party, I’ve since learned that patriotism has nothing to do with party affiliation. It also has nothing to do with blind devotion or sacrifice.  I’m almost 40 years old now and I find myself questioning almost every day how I feel about my own country, though I can say with sincerity that I am grateful for living here and for the many opportunities I have had from living here. I can also say that I respect and am grateful for the rights I am afforded for living here.

I am better able to define patriotism by what it’s not.

It’s not patriotism to pretend our own country’s dark history and attempt to ignore the legitimate pain past generations caused on the innocent, assuming that because it is in the past that it didn’t happen or worse, to dismiss the hurt caused in the first place. Our country can’t hide behind the excuse “It happened in the past, get over it” to a current generation while exalting the same past generation in the next breath.

It’s not patriotism to assume our Constitution is a living document, meant to be applied and adapted for modern times when clinging to firearms that the Founding Fathers could never have even imagined, and then refuse to apply the same principle of the Constitution’s ability to live and breathe when extending its rights to those who have been marginalized. Patriots, in the end, do what the original signers of the Declaration of Independence were willing to do: they’re willing to make their names known even when doing so would make them guilty of treason. Standing in Independence Hall (unlike the famous picture), in a bright room with several windows, they stood huddled around a table, the room darkened by windows so they couldn’t be seen, they signed their name to a document:

…accordingly all experience hath shewn, that mankind are more disposed to suffer, while evils are sufferable, than to right themselves by abolishing the forms to which they are accustomed. But when a long train of abuses and usurpations, pursuing invariably the same Object evinces a design to reduce them under absolute Despotism, it is their right, it is their duty, to throw off such Government, and to provide new Guards for their future security.

Patriots do not attack anonymously on the internet, using handles hiding their identities. And they don’t make petty demands when “evils are sufferable”. Patriotism means allowing what is sufferable for the country if it means it would be better served to work on “abolishing the forms” rather than the entire government.

Patriotism doesn’t mean that I am never allowed to question the government or criticize what it is doing. In fact, our sainted Founding Fathers demand we do exactly that. Patriots do the dirty work so citizens can watch the parade.

This political season has somehow changed the image of patriotism in a way that I don’t know if this country will ever recover. I hope the country will recover and will be better for it but until then I will remain uncertain of my feelings for it. I want it to be a better country.

I don’t want it to be great again. I’ve only ever wanted it to be better than it was yesterday.