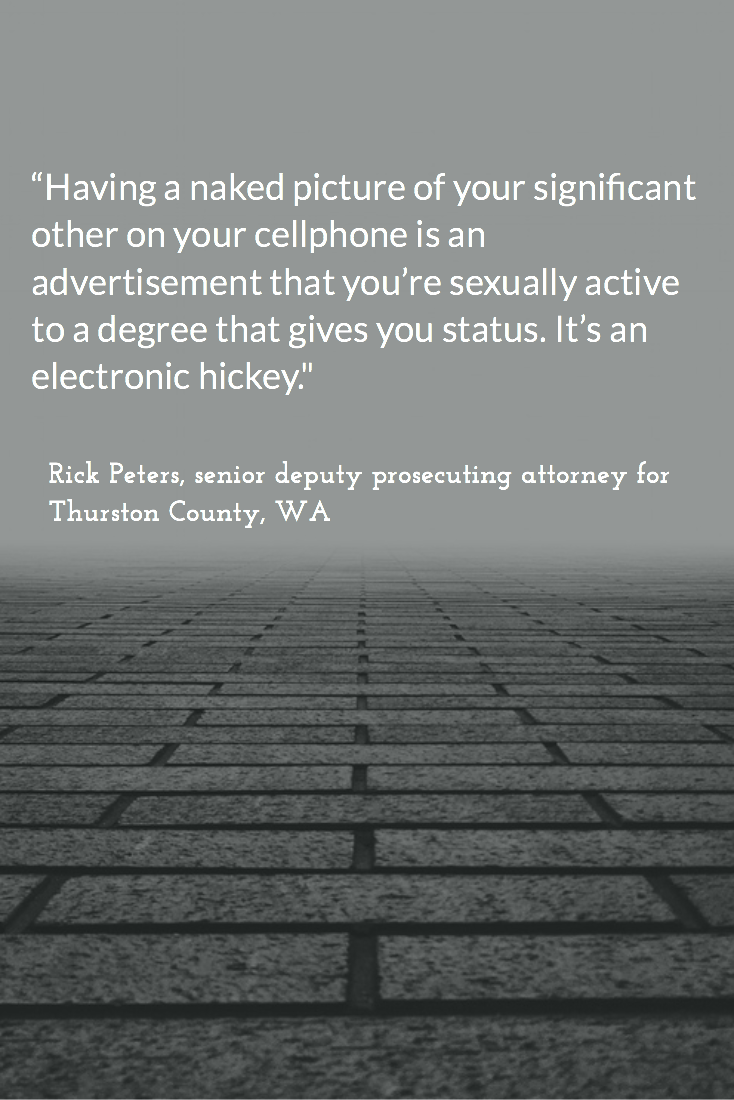 “Having a naked picture of your significant other on your cellphone is an advertisement that you’re sexually active to a degree that gives you status. It’s an electronic hickey."

By far one of the biggest concerns I heard from parents focused on what are called hidden or vault apps. With good reason. Just last November in Colorado City, Colorado at least 100 students were involved in what was called a “sexting ring” by the press, sending and receiving sexts an estimated 300-400 nude pictures to each other all hidden on their cellphones using a vault app. What teenagers fail to recognize or comprehend either due to their age, is that possessing and distributing naked pictures of their underaged classmates is child pornography — a felony. As of this writing, no charges have been filed and the football team merely had to forfeit its final game of the season. There is evidence that administrators knew photographs were being exchanged but had no idea to what extreme. However, parents and students were complain for at least three years.

In comparison to Colorado is the story of Margarite, an 8th grader, who sent a naked photograph to a boy she thought would be her boyfriend. The photograph quickly spread and essentially went viral through her middle school. Her life was ruined. Hundreds and possibly thousands of students saw her nude photograph without the assistance of a vault or hidden app. Yet within a few weeks, several things happened that made a difference. Margarite moved back in with her mother who noticed something was wrong and asked her why she was upset. The principals involved were persistent in confiscating phones and found the students involved in forwarding the photographs. And law enforcement were willing to press charges.

Why do I compare these two situations when one involves vault or hidden apps and one does not?

There is an understandable amount of fear and worry when it comes to what our children are involved with today. Pornography is a real threat. Sexting is a real concern. Predators are a real worry. The fact that apps even exist for the sole purpose to hide things bothers me as a parent. Anyone who argues that vault apps are helpful for hiding banking apps is frankly naive. These apps were designed to hide things that the phone user knows he or she shouldn’t have on the phone.

When it comes to keeping your child safe or preventing your child from using a vault app there are really only two ways to do this:

I am not an expert in parenting. I make plenty of mistakes and I’m sure my teenaged son would agree. But one thing I have learned in parenting and before I retired from teaching is that when I approach a situation as if I want my son on the same team rather than in a punitive way, he will always join my team.

What made Margarite’s situation so different from Colorado City’s, even though it was such a horrific experience for a young girl to go through, is that the adults in her life all engaged and became proactive. Once she moved back with her mother, her mother quickly noticed something had changed in her daughter. The administration quickly acted in confiscating phones and questioning students, and once they found who had started forwarding the photo they acted on disciplinary action. Maragrite’s mother had no problem calling the ex-boyfriend’s mother and his mother immediately took action too. These were all parents who did the right thing. By not excusing the behavior and acting on it, they were able to open up a dialogue with their children and students about this not being appropriate behavior. By students being arrested and facing charges, they were shown that actions have long term consequences. This was a great example of what should happen before a vault or hidden app is even downloaded, and what Colorado City failed in protecting their students.

A Vault App is Already Downloaded, Now What?

So what if you think there is already a vault app on your child’s phone? What should you look for? The first thing you should look for is any duplicate apps. There is no reason for a phone to have, for example, two calculator apps, two cameras or another utilities folder. There are other apps that will look like it has logical function when it is opened but if you think about it after a second it doesn’t make any sense. For example, the Hide it Pro App will look like an audio management app once it is opened and even have slider bars as if it is managing the phone’s audio, but there is no purpose to having — again — a duplicate app that copies a function that the phone’s own system management will do. Most free vault apps are not that sophisticated, meaning you are able to find them if you look in the phone’s settings and see what apps have been downloaded. The more sophisticated apps that set up decoy vaults with decoy passwords are the apps that are paid for or require a monthly subscription. For example, the NQ Mobile Vault has a free version but its premium version offers the decoy folder and also a “stealth” mode which will allow the folder to completely disappear from the phone’s screen. However, NQ also offers several other products including a family guardian plan for those who have android phones, so this company is not the basic app builder looking to profit off of teenagers who want to hide naked pictures. They offer a wide range of security products.

Android users can look for decoy, vault or hidden apps in what is called “The App Drawer”. From here, you will be able to scroll down and see if any apps have been “hidden” from the main screen.

And of the best tips I can offer if detecting a vault app on an iPhone is to go to the phone’s Settings –>Privacy–>Camera to see what apps have requested permission to use the phone’s camera. Vaults have to have access to the camera.

But what happens if you’ve discovered a vault app on your child’s phone? How will you approach that conversation?

I remember always being yelled at when I was growing up no matter what I did. This is not an exaggeration. It didn’t matter if I was to blame or not, I was punished. This is another lesson I have taken with me into parenting and I have worked hard to not assume anything when I feel as if I have “caught” my child doing something. Of course I have blown it lots of times, but I try hard. Believe it or not, your child might be using a vault app not to hide things from you but from their friends. I would see kids grab another kid’s phone and run off with it countless times when I taught at the junior high so they could find out who the kid liked or who knows what reason. I don’t advocate assuming your child is always blameless, but I do encourage giving a child an opportunity to explain. And then for parents to activate what I call their bull shit detector.

Parents will always be one step behind when it comes to technology. This is just a reality we all need to accept. However this doesn’t mean that we should abdicate our responsibility to our children in keeping them safe and being involved in their lives. We have no choice but to work harder in staying informed. Even if it means I have to learn how to play Minecraft and Halo. That can be a whole other series of articles.

We have an opportunity to have our children teach us how to use technology, how to use social media platforms or how to code. This is an amazing time to be alive and to be raising children. Instead of looking at it with fear we should be looking at with wonder and excitement. I truly believe that if we as parents show our children love and respect for the information and knowledge they have, asking them to join our team so to speak, that we will create stronger relationships and better overall communities. They will see that we genuinely love them and care about their well-being, and that the issue isn’t about not trusting them — it’s about wanting to create a strong environment for them to grow in. Because that’s what being a parent is all about, right?