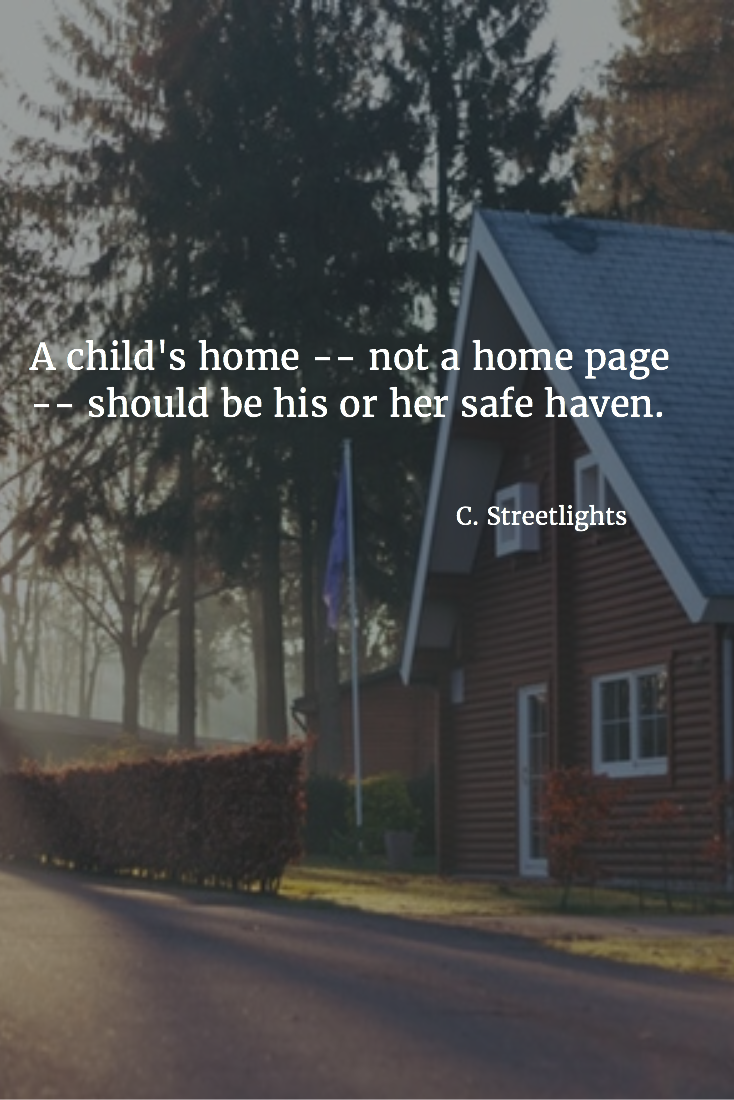 Depending on which article you read, most will admit that teenagers are using Facebook less than they were just a few years ago. According to the Pew Research Center (an organization that I tend to look towards for most statistics), 71% of teenagers between 13 and 17 years old still use Facebook — making it the most used social media site. Instagram is the second most used site (52%) and SnapChat comes in at third (41%). However, considering that 92% of teenagers go online daily (nearly 75% of these teenagers do so on their own smartphone), it is no surprise that the vast majority of our kids use more than social media platform. We need to be literate in not only Facebook and Instagram, but in some of the other apps used primarily for texting. If you’re just joining my “What Parents Need to Know” series, I focused on cell phones last week. Because the statistics say our kids are still on Facebook, I thought I would write about some features on Facebook that can help parents in protecting their teenagers.

First, I recognize that every family is different and will have their own rules regarding the internet, social media, and so forth. That’s fantastic! In no way do I come close to claiming that I have all the answers. I wish I did! But I do have a few years of experience from being an educator and a mom to draw from, plus my own observations from being on social media for a long time. The most important thing that any parent can ever do is to have an open relationship with his or her child before social media and the internet ever comes into their lives so that if anything of concern does come up, a child’s first instinct is to go home to their parents. A child’s home — not a home page — should be his or her safe haven.

When my son opened his Facebook account, I sat next to him to show him how it worked. We first went through all his general and privacy settings. (These screenshots are actually from my Facebook account. Accounts for minors have essentially the same options with just a few small differences.)

(Image 1) The General Account settings page is basic information. Your child’s name and username is typed in. The username can only be changed once, so make sure your child understands that a goofy username now might be pretty cool probably won’t be in ten or even three years from now. The internet is forever. When it comes to the email, however, I created an email account that is used only for my son’s social media accounts. I did this for several different purposes but I’ll explain just a couple. First and most important: cyberbullying. Like adults, kids feel empowered by the anonymity of the internet, even when they’re using their own accounts. They will say and do things they would never do in person because of the detachment that comes with a screen. By creating a separate email account, all of my son’s Facebook notifications are delivered straight to that account. This means all of the messages he receives on Facebook are not only delivered to Messenger (Facebook’s messaging app) but also to the email account. The same thing happens with anything written on his Facebook wall, comments on anything he posts, etc. Every month I go into this email account and organize the notifications into different folders. I’ve done this because I know how hard it is to prove cyberbullying when it is done online. Kids will send hateful messaging, write horrifying comments and the like but then delete them when they think they’re about to get in trouble. By keeping an extra record, it protects my son and everyone else from potential conflict. Plus, it’s not any extra work. Another reason I do this is because since he doesn’t log on to Facebook every day, or sometimes he will even go weeks, he can go through his notifications quickly through the email and see if he even wants to bother logging on without Facebook becoming a “time suck” for him. It’s also easier for him to not become emotionally engaged in something that was posted several days ago rather than seeing it posted just 5 minutes before. Just be sure to select that you want to receive all notifications.

The other feature in Image 1 I wanted to point out is towards the bottom where Facebook gives you the option to download all your data. I love this option! When you download your data you are able to select exactly what data you want downloaded. I will personally download my Facebook wall’s data about once every three months. This gives me my statuses and anything that has been posted. I do this as a way to keep track of my family and I’m then able to go back and journal what has happened in the last few months. Because I know I do this regularly, I will often post things to my wall that only I will see but want to make sure I remember for later. Downloading the data is a must.

(Image 2) There are a few important things to notice in the Privacy Settings and Tools though the most important things will come in other screens. My son came into me the other night and said, “I don’t know how you did it but you’ve hidden me on the internet like a ninja!” He and his friends were searching for themselves through Google and they could find everyone everywhere except for him. This menu is where part of that ninja magic happens.

In the first section “Who Can See My Stuff?” you want to select “Friends” as being the only people who can see your future posts. Keep in mind that you can always change each of your posts to the actual viewing audience you want, but for now, it should be set “Friends.” What is also incredibly important — and I stress this to ANYBODY when Facebook comes up — is to use your Activity Log when it asks you if you want to “Review all your posts and things you’re tagged in”. Yes, use your Activity Log! By using the activity log you will be notified that you’ve been tagged in someone’s post or photograph. You will then have an option to approve the tag or not. The post or item will still exist on that someone’s Facebook page but if you don’t approve the tag it will be hidden from your timeline plus you have the option to remove the tag so your name is not associated with whatever it is you’ve been tagged in. The last item in this section is about limiting the audience for things you’ve posted in the past. It is absolutely imperative that you select “Limit Past Posts” and I’ll explain to you why.

Many teenagers, in the interest of having lots of friends right of way, will want as many people as possible to send them friend requests. No. This is the time when parents need to step in and select “Friends of Friends”. By leaving themselves open to friend requests without some sort of vetting process (in this case their friends), they not only compromise themselves but also their friends and families. Likewise, only their friends should be able to look them up via their phone number or address. And how is it my son can’t be found on the internet? By not allowing my Facebook profile being searchable on search engines. And neither is his.

These are just a few things about the general and security settings in Facebook. Now let’s talk about some specifics.

The timeline settings can be a bit confusing at first but they’re also the easiest to change. (Image 3) Part of the confusion is that Facebook doesn’t have “a wall” anymore. For us Facebook old-timers the wall has been replaced with a personal timeline. The first option is just about who can post to your timeline. I strongly encourage the wall only being open to friends so that kids don’t have to worry about strangers posting things that they don’t want to see there. I tell my son that his Facebook wall is like his home — he should invite only what  he would like to have here.

This menu goes over the tagging options again in better detail. It again gives you the option to review tags (same as the Activity Log), but it also adds the option of who actually sees the posts you’ve been tagged in and you’ve allowed on your timeline. Going a step further, you can also determine who sees what is on your entire personal timeline. There are a few other tagging options again that might seem superfluous, but it’s Facebook’s version of asking “Are you really, really sure?” It also asks if you want people to add additional tags to any of the photographs you’ve been tagged in, and most creepy in my opinion, is the option to decide who sees tag suggestions whenever your likeness is uploaded to Facebook. This gets a resounding “No one”.

If you’re a parent who is more concerned about wanting to know what a child is doing on Facebook or you plan on just doing a check-in now and then, the Activity Log is a really useful tool for you. When you first open the Activity Log (found either on the profile page or in the drop down menu next to the notification drop down menu), you’ll be presented with the user’s account activity. (Item 4) It will itemize every comment, like, game played, friend added, etc. in this location. It also shows the date and time so if your child was supposed to be in bed asleep or studying for an exam but was actually playing Bejeweled you’ll be able to see it. If you want to only see the actual posts your child has written, you can filter out everything else other than posts. (Item 5) Maybe this post has you freaked out over what you’ve been tagged in and you now want to find every tag and remove them. Great! Select that filter from the left hand menu and you’ll find every single thing you’ve been tagged in. (Item 6) You’re also able to go back and review all the posts you’ve hidden from your personal timeline for whatever reason. (Item7) You can either decide to approve them or just leave them hidden. The last option in the Activity Log I wanted to point out is something I think is very useful and that is the search filter. (Item 8) If you have a concern that your child is searching for things that are inappropriate on Facebook — a platform that does remove photographs of women nursing their babies for violating their community standards, by the way, but not pornographic images — than this is the place to look. Personally I use the search function to look for my existing friends and am too lazy to scroll through my friend list.

Facebook is not going away. It’ll continue going through several changes just as it has in the past. And although teenagers say they are leaving it for more private platforms, they will continue logging on anyway. If we start setting the standard for privacy and safety on Facebook hopefully the message will carry on to other platform apps.

One thought on “What Parents Need to Know About Facebook”