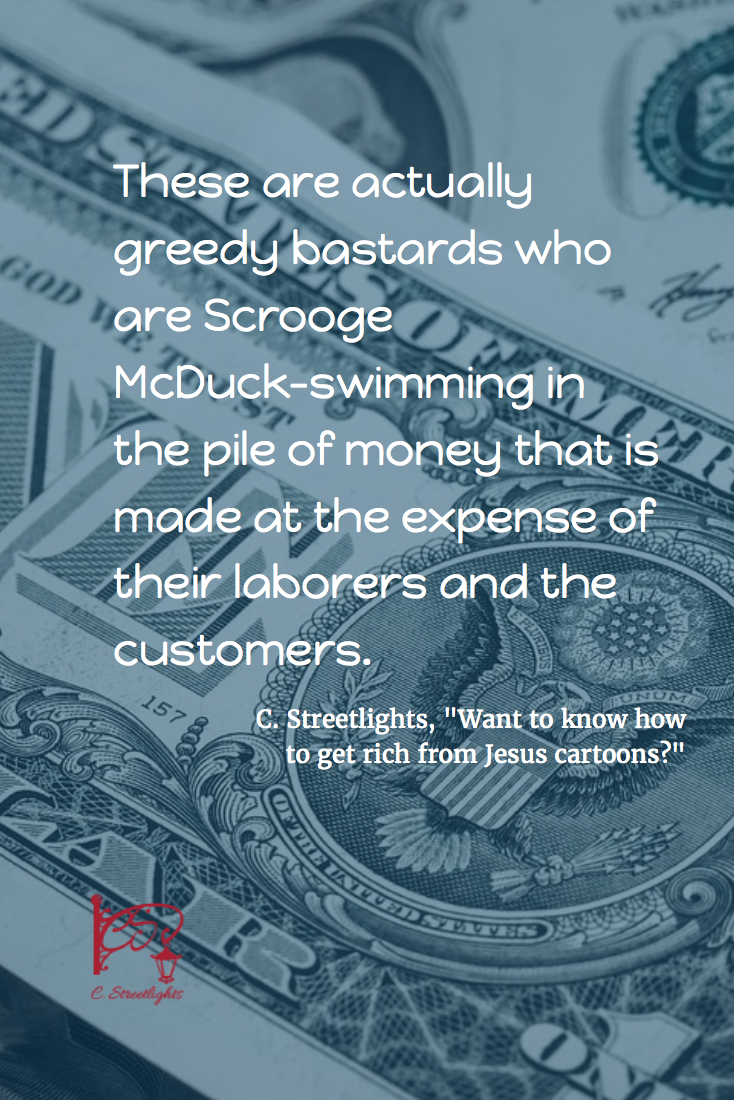 I have a lot of love for Jesus. Not in a raise my hands in the air and walk the aisle kind of love, but I love Jesus have faith in Him. I’m not going to put any bumper stickers on my car in His name or anything, though. And I’m not going to shove Jesus into people’s faces if they don’t want Him either because I kind of think everyone needs their space. Even Jesus.

I was raised to have a certain amount of respect for different groups of people. I don’t remember being specifically taught to not kick puppies — I sort of just knew that it was wrong to do things like that. My friends and I grew up understanding that it was morally and ethically wrong to take advantage of little kids who were selling lemonade, for example. Nobody had to pull us aside and draw us diagrams of how it would be cruel to convince these little kids we were their friends and then steal their lemonade money. I’m pretty certain nobody I knew was either a shitty person or basically stupid.

We never had to be taught that manipulating the elderly was something that only the lowest scum of the earth would do. Sure, we might go over to our grandparents because we knew they always had ice cream bars hidden in their freezer, but that was not the same thing as convincing them that their grandchildren all needed their own sets of overpriced DVDs featuring Bible stories. Especially when the elderly have to make decisions like paying for their utilities that month or paying for that month’s set of DVDs for each grandchild — each DVD costing approximately $36 for 30 minutes. I mean, what kind of person would do that to an old person, right? Aren’t we a society that is supposed to pride itself in how it takes care of its most vulnerable?

Spoiler: Let me tell you something about Jesus. I’m actually not a Bible scholar at all but I can almost guarantee that He was not a cartoon in real life. This is important to know before I go on.

I’m a member of The Church of Jesus Christ of Latter-day Saints and as I mentioned, I have a lot of love Jesus so when a company goes out and peddles some wares for Jesus and claims they’re doing it out of love for Him and love for my Church, my red flags go up. Rarely will a for-profit company peddle something out of the goodness of its heart and be, ahem, for-profit. Especially when it’s a company that is well known for its predatory sales techniques. The Church does not endorse this company and is not affiliated with it in any manner, however this company is like one of those neighbors who once borrowed the hedge clippers and now thinks they’re related by marriage.

We will call this company The Sniveling Mixtures.

For some reason, The Sniveling Mixtures thinks that parents everywhere are inept in the ability at teaching their kids about Jesus without showing them cartoons about Jesus. Because when kids need to relate to Jesus and who He is in their lives they need to be able to relate to a cartoon. Obviously.

Jesus set the precedent when it comes dishonest salespeople and their business models. He doesn’t like it. There was that whole unfortunate business in the Temple when Jesus came through and kicked out all the money changers. I would have loved to have watched that stream live on CSPAN. He threw over all the tables and tossed out all the money changers, slapped his hands together and said, “My house shall be called the house of prayer; but ye have made it a den of thieves (Matthew 21: 12-13).” In the books of Mark and Luke, Jesus calls a spade a spade and accuses the Temple authorities of thieving, saying the have preyed on poor widows. Dove sellers were actually selling the doves that were being sacrificed by the poor women who purchased them for the price of a full day’s wage.

What really roasts my goat about this whole Sniveling Mixtures thing is how the company tries to promote itself as the real deal when it comes to our country’s so-called Christian values when it is not. Sniveling Mixtures relies on what is essentially debt bondage to sell its animated DVDs — forcing its salesforce to sacrifice almost all of their wages just for putting out the product with the assumption that once the initial costs of their selling contract is paid they will begin making money.

You actually read that right. This is not entrepreneurship or the joys (yay?) of capitalism. These are actually greedy bastards who are Scrooge McDuck-swimming in the pile of money that is made at the expense of their laborers and the customers.

This company sends out legions of salespeople — almost all young and faithful members of the LDS Church who believe they are doing the right thing — to sell their products. They are told that their work is valuable, necessary and vital because people need moral entertainment in their homes and without these videos, it will be harder for them to find it for their families. I don’t blame the intentions of these young salespeople. They are told they can earn up to $74,000 in one summer — as long as they can get their customers to buy an average of 3.8 sets and sign up over 100 customers. That can’t be too hard, right? It says right on their website:

College kids are hardworking and if they could work in the summer so they could concentrate on school in the year, that would be a dream come true. They could avoid student loans and not have to prolong years in school by not having to work during the semester. What college student would turn this down?

That’s exactly what this company counts on. They also count on college students being willing to move away for the summer to work in a more “competitive” market and so they can’t live at home.

What they don’t tell these college students is that they are working for 100% commissions. That’s not too bad, you might think. A lot of sales jobs are like that, right? Except that these students are also not told that they won’t receive their commissions until after the company is reimbursed for all their living expenses, contract fees, plus a percentage of what they made. It is more likely than not that even after working an 80-hour week, that a student won’t make anything even after signing a contract at each house. In fact, a student could end a summer and be in debt with the company.

Let me repeat that: a college student will leave home, forced to live with other salespeople in a place not of their choosing, work close to 80 hours a week, and come home not having made any money. Not only that, he or she will have to pay this company to get out of a contract with them. How does this make sense?

Survivors In My Basement

While I have heard many first-hand accounts from individuals who have come home from selling these videos only to come home in debt, this situation is now living in my basement. My nephew and his wife spent their summer in a suburb of Las Vegas where they shared a multi-million dollar home with a few other people living the cartoon Jesus dream. They couldn’t choose a more modest apartment so that their rent and living expenses could be more affordable; they were locked into this living arrangement along with everyone else because someone in management had a taste for champagne wishes on non-alcoholic dreams. You know the kind: Beautiful people living in beautiful places they don’t own and screwing over people that don’t matter to them.

The kid who had a depressive episode and had to go home for a doctor’s visit and medication update didn’t fit that beautiful image, right? So the biz sent him home and was told he wasn’t performing in sales anyway. WWJD? Invoice him for the rest of his contract, totally.

For some reason we get really morally indignant when we hear stories about kids being taken advantage of or cheated out of their lemonade money and we become outraged. As we should be. We are horrified when we hear about one of our elders who has been similarly abused. Nobody — except for the assclowns — will say that our kids and old folks deserve to be taken advantage of. So why aren’t people more indignant when these college kids come home from being wrecked after working 80 hours a week all summer long and have nothing to show for it? Why is it we suddenly expect that it is okay for college students to be taken advantage of just because “they should have known better” or “they deserved it”? Is it because we feel all the hateful feels towards door-to-door salespeople or because it’s just because they’re schlepping prepackaged religion? Whatever the reason we need to get over it because this is the kind of bullshit that allows systemic human trafficking to continue.

Don’t believe me? According to the Polaris Project, the leader in the fight against global human trafficking, it identifies labor trafficking as modern day slavery and says that “labor traffickers – including recruiters, contractors, employers, and others – use violence, threats, lies, debt bondage, or other forms of coercion to force people to work against their will in many different industries.” (Learn more about labor trafficking in sales crews here.) The moment that Sniveling Mixtures lures college students and others away from home with supposed hopes of making high-ranking sales only to force them into contracted living arrangements, it is no longer an “independent contractor” as this business claims. It becomes an issue of trafficking — and that’s why there should be more of a public outcry.

This is a business that not only claims to be Christian but also wants to force its product into people’s homes so that they can help families have moral entertainment sold to them by an unknown number of salespeople who are bound to the company by indentured servitude. What blows my mind is how FEW PEOPLE think this is wrong. Are we living in colonial America? The last time I checked everybody had good oral hygiene and we knew slavery was wrong. Most people anyway.

Indentured servitude, now known as unfree labor, is any sort of slavery in which a person is employed against their will and under a threat towards themselves or family. If there is some sort of payment, it can be in the form of a payment wholly or mostly consists of cancellation of a debt or liability that was itself coerced, or even belonging to someone else.

But wait, isn’t this illegal?

Yes. Obviously. If an already poor college student goes away for the summer hoping to earn enough money by working 80-hour weeks so that he doesn’t have to work during the school year, what recourse does that student have against Scrooge McDuck-swimmers?

And how many people are sympathetic towards college students who do door-to-door sales selling cartoon Jesus?

So how long has The Sniveling Mixtures been in business? Since 1974.

And that’s how you get rich from Jesus cartoons. 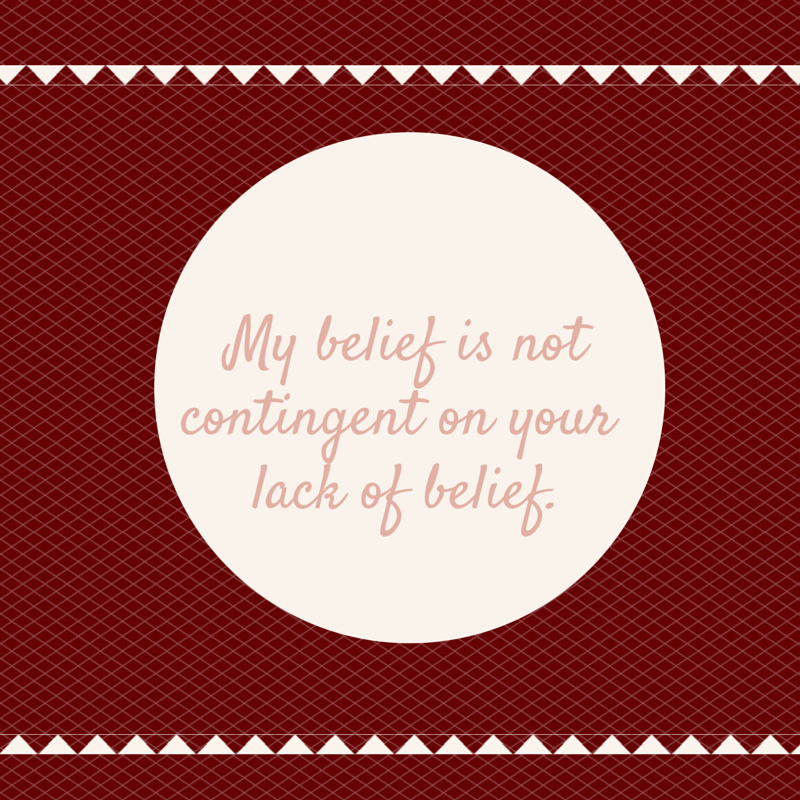