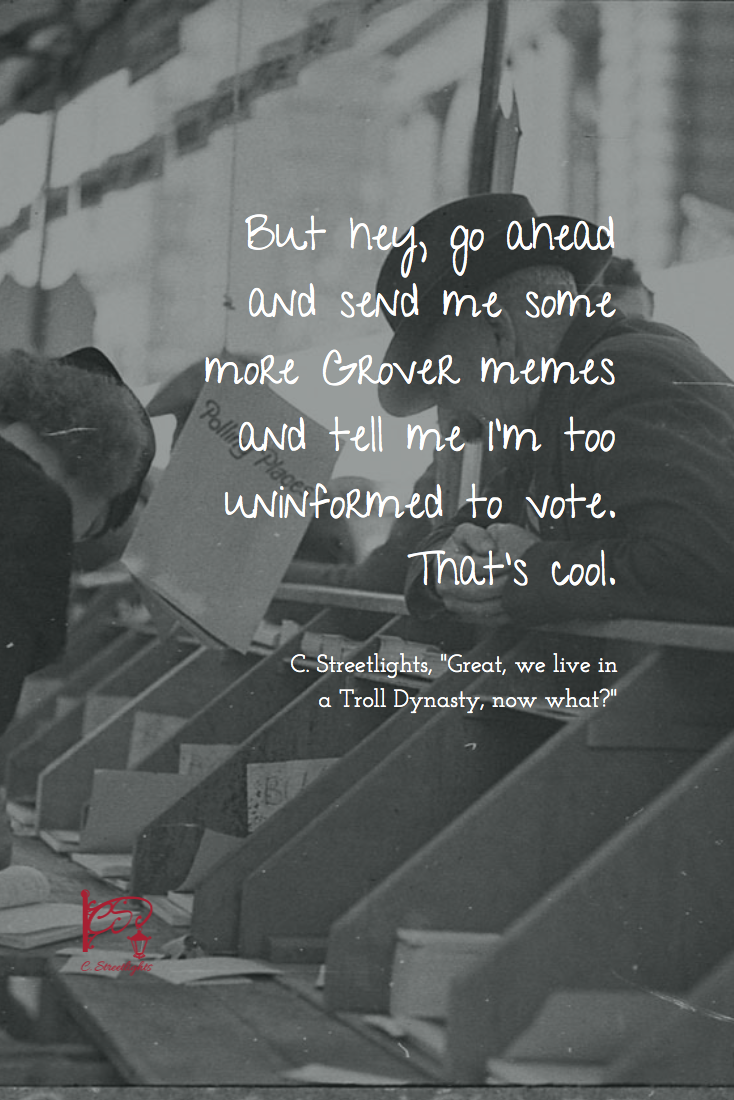 In case you haven’t noticed the election season swirling around us lately, the usual trolls are out on both sides and they are foaming from their snide little mouths. With our undeniable reliance on the internet and social media, it’s safe to say that some have slowly risen to power and have become a member of the newest Troll Dynasty.

Trolling of course is not new and neither is people just being mean because they can. The anonymity of the internet affords certain people the feeling of courage when they more than likely have none in reality.

But what about the kind who are power hungry? The ones who feel a rush in spreading false information simply because they enjoy the fevered orgiastic frenzy over how many likes, retweets, and mentions they receive in their timelines? They pathetically reign over their followers, purposely throwing people who disagree with them into their mentions by using the quote retweet function so that their followers can attempt to humiliate the dissidents.

How does this even happen in a world that doesn’t even exist? We’ve allowed a Troll Dynasty to rise to power by promoting wise advice (“Don’t feed the trolls.”) while also not bothering to second-guess anything we see on the internet.

Critical thinking skills have been sacrificed to the Troll Dynasty and its only emboldened its empire.

Just recently, an image of an invoice from the Clinton Invoice dropped onto social media. I saw it shared everywhere, primarily from conservatives, and always with statements about the criminal activity of Hillary Clinton and the proof in this image. People were outraged by supposed payments to people and organizations itemized in the invoice. Just by looking at the “invoice” it blatantly obvious it was a forgery. If nothing else, why would a foundation that was engaged in illegalities actually itemize “Voter Suppression”? It was laughable:

This isn’t the first time the invoice’s creator (found on Twitter as @mongo-ebooks) has purposely duped Trump supporters on Twitter. And I assume it won’t be the last. He doesn’t have the best opinion of those who fall for his fakes, and honestly for good reason. In his interview with The Daily Beast, he says, “The wonderful thing is this is the third time 55 dipshits per minute have fallen for my Photoshop and MSPaint work.” Donald J. Trump, jr. even fell for a fake document of his that supposedly reveals collusion between the Clinton Campaign and Public Policy Polling and retweeted it. (The retweet has since been deleted.)

This kind of image, though obviously false, is still being shared and blogged about by conservative websites. It is still being analyzed by conspiracy theorists. And this isn’t the only one. Just last week a “leaked” voicemail reported to be of vice-president candidate Tim Kaine yelling and verbally abusing his 11-year-old daughter. Certainly this would be concerning to a potential voter. Especially if a voter was considering Alec Baldwin for vice president.

And yet, both of these examples would not have reached viral levels if people would have taken a moment to consider the possibility that it might not be true, or — even better — to engage in actual conversation with other people about the topic. Instead, as what happen in a good Troll Dynasty, the followers blindly retweet and share without critically thinking, openly mocking anyone who might disagree or deliberately misconstruing conversation starters as stupidity.

But what if it’s just in a forum like Twitter where people can more easily engage in a possible conversation and ask questions in order to avoid confusion or misunderstanding? I wanted to know if some people were still just as inclined to jump on someone who doesn’t simply follow the leader and bow down to the groupthink. I decided to set up a small and very unscientific experiment to see what would happen if I appealed to the extremes on Twitter by tweeting something that would grab their attention.

I was already at a disadvantage. After being hacked last week and having my original account stolen from me, I no longer had the follower count I once had, but at the same time I figured this would lend me more credibility by looking like the nobody I really am.

My first attempt was a dud so I won’t write about it here, but I found the perfect person for another attempt: I designed a tweet that I attached to this one via a quote retweet that I knew could be taken one of two ways depending on how a reader decided to infer it and the motive of the inference: either as a “conversation starter” or as being ignorant.

And bingo. By saying “Bill Clinton hasn’t taken [an] active role in campaign for his wife whereas Donald Jr. has taken active role in his father’s” the original poster inferred that I was obviously clueless and made that implication known to his followers. I had two possible responses drafted depending on the outcome of my first tweet. If the response was an acknowledgement that yes, it was a conversation starter, than I would have followed with the differences in how Clinton’s campaign is using her husband in this election versus in 2008 when he was more of a liability in that primary season, which is why in this campaign we’re not seeing him in as many “front and center” roles.

Instead, within seconds after the original poster alerted his followers of my lack of intelligence, my mentions began to fill with delightful gems of people asking me if I was high, stupid, or just sending me memes because somehow memes inform the public of high stakes politics.

However, I still had to respond to the original poster with the drafted response that I had designed specifically to see if anyone would pick up on the nuanced phrases I used that would support what I previously tweeted. (Spoiler alert: No, they did not.)

Isn’t that so nice? He told me to stop.

I specifically used the phrases “spokesperson” and “on behalf” to indicate that there was more to my argument but this made no impact whatsoever and this is why: His original “insult” to me has already been retweeted and liked enough times that nobody comes back to see any additional mentions. It’s a slam dunk to his followers and I’ve been put in my place, told I was stupid, ignorant, needed to take my crazy pills, was too high, yet also told to take another hit on the bong.

And I don’t give a shit.

What I do give a shit over is that Donald J. Trump, jr’s comments and conduct are relevant because he has done and is doing more for his father’s campaign. And this should be discussed more in an open forum like Twitter. There is absolutely no comparison at all between Bill Clinton and Trump, jr. And if people were a little less quick on there tweet finger and more ready on their thinking skills, we could have had a conversation about it. But hey, go ahead and send me some more Grover memes and tell me I’m too uninformed to vote. That’s cool.

Who was out in the press making statements on the campaign’s behalf over Corey Lewandowski? Who talked to the press about how important the family’s role was in choosing the running mate for Trump? Who actually was part of the vice president vetting process, interviewing Governor Christie himself? After the Skittle fiasco, who did Trump campaign spokesman Jason Miller call a “tremendous asset” to the team? Who met with Republican officials and the NRA on Capitol Hill? I could continue but I don’t feel it’s necessary. Donald Trump, jr. is intricately and actively involved in his father’s campaign, more so than delivering the typical stump speeches that family members are known to do.

As for Bill Clinton and his involvement with his wife’s campaign? There is no denying he has been campaigning for Hillary Clinton. But he is not making statements to the press when staffers are being fired. He is not acting as a surrogate. He is not interviewing vice president options. Through the primaries, he was kept as a low-profile campaigner, no doubt because of how he hindered Clinton’s chances in 2008. Of course, my friends in my mentions went for the low-hanging fruit and brought up when Hillary Clinton was sick in November, but come on. And the accusation of her “giving him the economy” (as someone phased it) is frankly stupid. Anybody should know that. There’s the whole 1967 anti-nepotism statute.

Yet none of this matters when you’re living in a Troll Dynasty because these are facts, right? All of this information is found from reading text that is longer than 140 characters long, and is not attached to cartoon memes. It takes high level inferencing skills and the ability to process information that might not match your own view of the country. All of this threatening to a Troll Dynasty so they don’t do it. They just wait for their cues like good followers and then hit share and retweet, insult and then brag, assuming they left those of us who disagreed to look stupid with a #koolaiddrinker hashtag.

Irony is never lost on me.