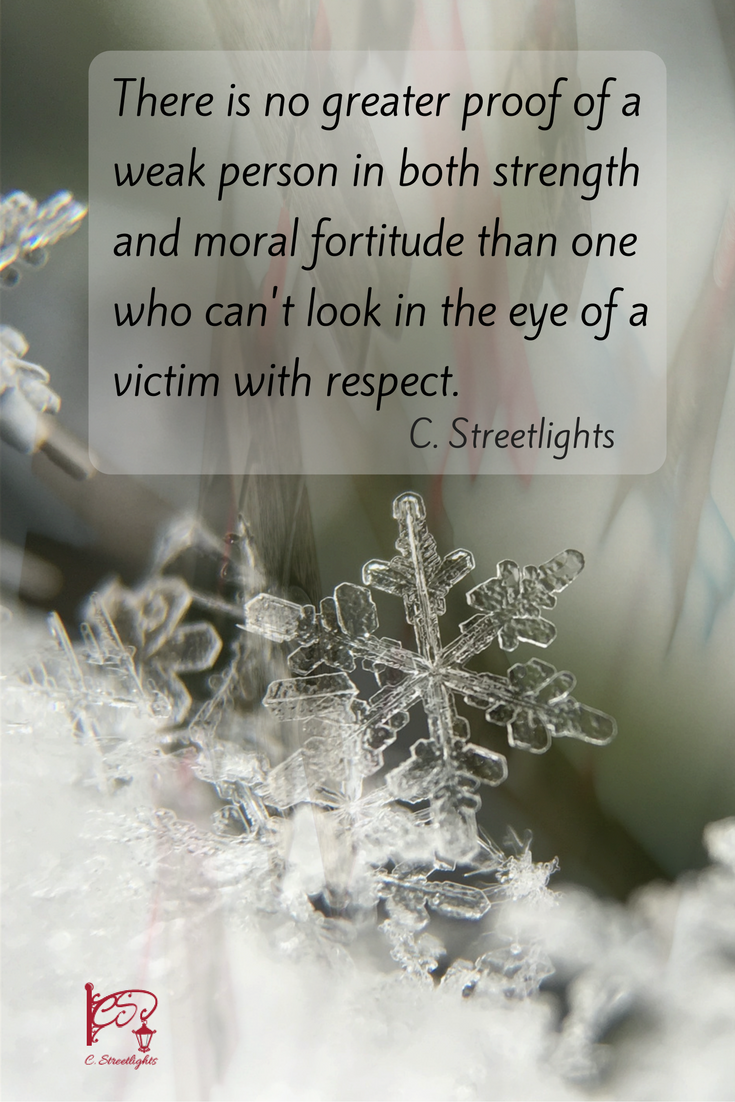 These are just a few of the words and phrases that have been flung at people over the last election cycle in order to disparage anyone who insists that there should be compassion and empathy for those who have been victimized. Of course, there were worse words, supposedly. I might write about playground insults later.

On Twitter and Facebook, supporters of the Republican candidate — now President-elect — crowed about safe spaces being taken away and how Millennials wouldn’t be soft and whiny if their parents would have just smacked them around like they were. After all, they turned out just fine and don’t complain about their lives or hard life is on them. Their parents never taught them about irony, I guess.

And yet, for all the tough talk, insults, and puffery, these individuals still remain willfully clueless as to the entire point of what trigger warnings are meant for and why safe spaces are needed. And they have to remain clueless for their own sake because if they truly understood the importance of trigger warnings and safe spaces, these people would have no choice but to recognize how truly weak and insignificant they are in the face of real courage.

There is no greater proof of a weak person in both strength and moral fortitude than one who can’t look in the eye of a victim with respect.

There have already been countless combative articles regarding the virtues of trigger warnings and whether they have merit in academics, particularly at the university level. The University of Chicago’s dean of students John Ellison issued a welcome letter to incoming freshmen assuring them that they would find neither trigger warnings nor safe spaces at the university, even though he doesn’t use either phrase correctly. The trigger warning is for the purpose of trauma survivor to determine for him or herself if the material in question is something that would hinder the recovery process. It is a tool for self-advocacy, not one for censorship as people will falsely claim.

So what exactly is a trigger? Certainly not what the people who organized “The Triggering” on Twitter think it is; I’m sure everyone is shocked by that. According to Bessel van der Kolk, a Dutch psychiatrist who has published extensively on how trauma affects the mind, brain, and body, says that “a trauma trigger is an experience that causes someone to recall a previous traumatic memory, although the trigger itself need not be frightening or traumatic and can be indirectly or superficially reminiscent of an earlier traumatic incident.” These triggers are related to PTSD, a condition in which people are often not able to control the recurrence of emotional or physical symptoms. Therefore, a safe space is an area that is just what it sounds like: a place where an individual with PTSD or other going through other trauma recovery can be without worry of experiencing any triggers at all. This safe space can be somewhere like the individual’s bedroom, wearing a specific robe, being at an understanding friend’s house, his or her counselor’s office, and yes, it can even be a dorm room, a student union, or a classroom if that’s the environment a teacher or adviser wishes to create.

Are trigger warnings being overplayed? Perhaps. That isn’t my call to make. However, the National Coalition Against Censorship conducted an extensive survey of over 800 participants to find out more about the so-called “Trigger Warning” epidemic. The NCAC acknowledges it is not a scientific survey but the results do give a broad range understanding of what is happening. One interesting result from this survey is that while many professors are opposed to issuing trigger warnings, they are actually giving them without realizing it in their syllabi, implying that there is a lack of understanding of what they are. The most important outcome of this survey, however, is that instructors are adamant that individual faculty members should have the right to determine if they do or do not issue trigger warnings — not the administration. One of the NCAC’s concluding points is an important one to highlight amongst all the criticism about these warnings:

The survey responses display deep concern for students’ well-being, and a widely shared desire to create a learning environment responsive to students’ needs and respectful of their views and experiences.

Mocking those who have experienced trauma and who do need these warnings, or worse, scorning the reality of the warnings’ existence, doesn’t make you bold or edgy. It doesn’t make you better than those of us who can’t listen to certain songs on the radio or watch certain television shows. I’m not a snowflake because hearing the Pantene slogan “Don’t hate me because I’m beautiful” can cause me to have a panic attack.

Becoming angry over something that doesn’t even affect you personally is weak because it shows that you aren’t able to control your emotions long enough to recognize that something like a trigger warning won’t interrupt your day. Not only that, people become a coward once they’re not able to “get over it” and can’t let go of the idea that there people out there who are willing to self-advocate for themselves and advocate for others. It takes a special kind of snowflake who can’t stomach the thought of those of us who are supposed to be meek little victims, but who are actually speaking up for ourselves and saying, “You know, it’s better for my mental health if I know beforehand if there are any scenes with violence against women.”

Because tough people just shut up and take it, right? If you’re courageous and tough than you just rub some dirt in it and get over it. That’s what people who make fun of trigger warnings and safe spaces do so we should, too. I bet those people never go out and have “Girls’ Night” or a “Night Out With the Boys” either, because that would be for weak people who need time away from the house. I bet those kind of people don’t ever complain about neighbors getting in their business, or their kids bothering them as soon as they’re in the bathroom, or needing to have some alone time. Only whiney liberals cry about that make believe stuff. Oh! And I bet they think movie ratings are for communists and only whiners won’t let their kids watch NC-17 movies and let their 4-year-olds play M-rated video games because ratings are just for crybabies.

Confronting a trigger warning for a survivor is not an easy task, yet I was grateful I did when I participated in The Clothesline Project. If you are not aware of this project, it is one that helps to publicly bear witness of the violence perpetrated against women.  According to their website, “It is a vehicle for women affected by violence to express their emotions by decorating a shirt. They then hang the shirt on a clothesline to be viewed by others as testimony to the problem of violence against women.”  Using shirts hanging on a clothesline to symbolically “air out the dirty laundry” this project has grown from one clothesline with 31 shirts displayed to over 500 individual clothesline projects hanging 50-60,000 shirts in 41 states and 5 different countries.

And mine was one of them.  One red shirt among thousands hanging as voices for the thousands of people in my own county.  I stood there as part of a sister- and brotherhood nobody wants to be a part of and I have never felt more at home. I didn’t feel conspicuous like I thought I would. I didn’t feel the despair or the humiliation that were once my constant companions.  I didn’t feel the desire to blend in or the shame in possibly being noticed. I felt everything all at once.

All at once I felt anger.  And sadness.  And tears.  And vengeance.  And violence.  And hatred.  And small.  I felt small.  I felt proud.  And unstoppable.  And vocal.  And empowered.  And mama bearish.  And vindicated.  And suffocated.  Then there was the hope I felt.  I felt hope that I could feel whole again, instead of just almost whole. I felt doubt and also faith.  I felt the tug and back-n-forthing in beliefs that always comes. I felt accomplishment. And the frantic desire for justice.

And I felt okay.

I haven’t felt that feeling of okayness in so long a time I almost didn’t hear it whisper.

I’ve had this clothesline pin for over a year now, sent to me by a very kind woman I briefly encountered on the internets. She knew me only as Streetlights Imagination, my pen name at the time, and in the small envelope it came in she included a small slip of a paper with the words: “May your streetlights always light the way…”

Wherever you are, sweet woman, I hope you know I am trying.

Because I’m a snowflake.