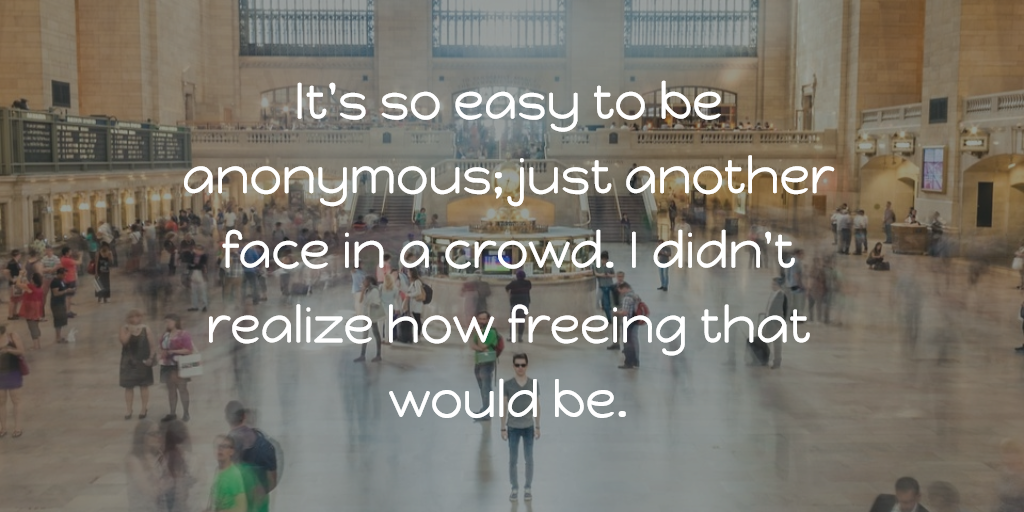 One of my favorite memories I have with my late father-in-law was when we spent a whirlwind day trip in New York City. It was on the day before New Year’s Eve, a Sunday, and I’ll never forget the energy that vibrated through the city. I’m so grateful to have Wendy Garfinkle back this week sharing her own New York City experience.

The last weekend in August this year, I traveled – alone – to New York City for a business-mixed-with-pleasure trip. I’d never been to New York City, but had high expectations. I went a few days earlier than I needed to so I could fit in some site-seeing…Central Park, the Statue of Liberty and Ellis Island.

The last time I traveled by myself was about 7 years ago. That trip also was to a place I’d previously never been (the state of Maryland, if you must know). But my destination then was a small town where lived someone who I very much wanted to see again, someone with whom I’d begun a – tentative – long-distance relationship.

That trip resulted in a cracked heart (mine… for the umpteenth time) – and the decision (his) that the long distance was insurmountable…even though I was considering moving for him. (Emotionally unavailable much?) And – not so coincidentally – the start of my daily RX regimen. (Ironic I think that 6+ years with my ex-husband didn’t cause me to need RX, but a failed, 6-month attempt at a long-distance relationship did…though maybe that was just the proverbial straw that broke the camel’s back…)

I got over it…and him (we still talk sometimes, but with age came wisdom…for me at least…)…but still take the RX, and didn’t travel alone to a place I’d never been, again. Until now.

Okay, full disclosure; I HAVE been to New York City before, for a cousin’s wedding. When I was 11-months-old. I don’t think it counts if you are:

I decided to put on my “big girl panties” and travel to New York City – The Big Apple, the City that Never Sleeps, The Melting Pot – alone for the Editorial Freelancers’ Association conference. EFA’s first national conference in a decade. It was momentous.

I rediscovered a few things:

I don’t think I’ll ever forget how I felt upon reaching first Liberty Island and touring the Statue of Liberty, then Ellis Island. There’s no substitute for your first glimpse of the Lady Liberty. Especially when you imagine how your ancestors must’ve felt when they saw it. This iconic image and symbol of the freedom and opportunities for which we stand is breathtaking.

Reaching Ellis Island and walking into the Baggage Room, the first room in the immigration building, following in the footsteps of millions of immigrants from all over the world – some of them my own ancestors – moved me to tears. And I was struck by the thought, how quickly we often forget to appreciate the freedoms so many of us were born with – the freedoms we seem to always take for granted. The freedom to travel when and where we want, to visit with whom we wish. To voice our opinions without fear of reprisal by a corrupt and tyrannical government. To be with a crowd of people we’ve never met before, or to sit among that crowd and enjoy being just another face in the multitude.

I survived – and thrived on – my solo adventure in The Big Apple, the teeming masses that surrounded me, the unknown that I faced head-on. I could become addicted to that kind of success.