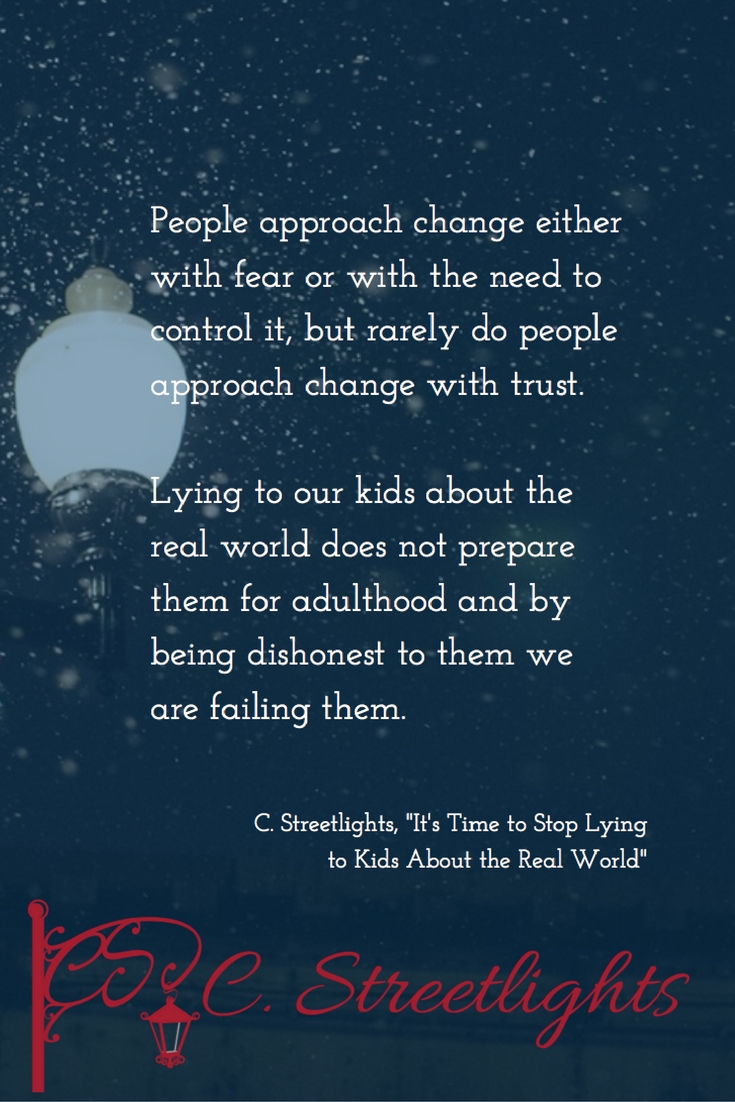 The Real World has been a bizarre bogeyman for far too long in my opinion. Wielded by parents to threaten children into cleaning their rooms and mow lawns for decades, the Real World soon slunk its way into the classroom so teachers could dangle it in front of students’ noses whenever they didn’t turn in homework assignments.

The mythical real world came up in yet another online conversation this week when my friend Rachel asked for opinion regarding an article she posted on her Facebook. The article is about a young lady (already 18 years old) who is suing her parents over their refusal to take down over 500 embarrassing pictures of her from their Facebook that they’ve made public. Rachel wanted my opinion as a mother of a nearly 16 year old son whose privacy I fiercely protect and because someone else commented that if this young lady was embarrassed than she should wait until real life.

Instead of encouraging and teaching kids that adulthood is a time to look forward to, a period of time when they can enjoy independence, work in fields that they naturally excel at — and be paid for it, develop rich and rewarding relationships, and sometimes have to learn from natural and logical consequences, we insist on perpetuating a lie that real life is a time of misery and drudgery, an extension of childhood in which they have no freedom and no individual rights, and that no matter what age they become there will always be someone else who has more control over their choices that they do. Let’s be realistic. If we tell a child to do a chore and are challenged by that child, does it make sense at all to ground a kid and then say, “If you don’t do your work in the real world, you’ll be punished for it”? Really think about this: Who do you know in your life who has ever been sent home and “grounded” for not doing a task at work? This is not a realistic comparison at all and kids know this. That’s why they’ll continually not do a chore and continually be grounded and not make the connection between hard work and the real world. Because news flash! there is no connection between being grounded and the real world!

I vividly remember having a disagreement with another teacher during an English department meeting who insisted that we, as a department, stop accepting late homework assignments in order to “teach the kids a lesson about the real world.” I adamantly refused, saying I would rather deduct late points and accept late work so that I could ensure students were learning the concepts and that this was a better representation of the so-called “real world”. Needless to say, we never came to a department-wide agreement and this is why: Who here has ever been late in paying their Visa bill and had Visa tell them, “We’re not going to accept your payment AT ALL because we’re going to teach you a lesson about paying your bills late!”

That’s what I thought.

And yet? Counter this lie with the lie that’s constantly told to them by the Helicoptering Parent Phenomenon that takes place also tells children that nobody is a winner because everybody gets first place AND everybody gets a participation ribbon at the same time. Parents pick out their children’s classes for high school when their children are in entering elementary school, and according to this article in the Washington Post, there is so much pressure on students from their parents to not major in the Liberal Arts, double majors at America’s elite schools have jumped by at least 40% — so students can have one major to satisfy their parents and one to make themselves happy. Why? Because parents perpetuate the lie that unemployment rates are lower for graduates with Liberal Arts degrees. Instead of allowing their darlings trust their own instincts on what they want to study, parents micromanage them all the way to the university.

Why are adults so scared to simply be honest with telling kids the truth about real life?

I’ve thought about this through the week as I’ve been in and out of my daughter’s elementary school working with PTA. Walking through the hallways with approximately 630 students is both energizing and exhausting; I can’t help but wonder what all these little personalities will contribute once they are out in “real life”. Looking around I see 630 chances at changing the world. Sometimes, people approach change either with fear or with the need to control it, but rarely do people approach change with trust.

Lying to our kids about the real world does not prepare them for adulthood and by being dishonest to them we are failing them. Adulthood is not a time of darkness or punitive misadventures. It’s also not a time for self-indulgence, the opposite of what happens once a child completes all his or her chores. Being honest with our kids about what really happens “out there, in the real world” means teaching them that sometimes we don’t get a task done and when that happens, there’s a natural consequence. Those natural consequences will vary depending on the circumstance and the task; if it’s a missed deadline, maybe he can’t go to a planned date that night so he can finish something. (My son is dating age, so this is an example from my experience.)

It’s also about teaching them how to set goals and to remain motivated. Painting a world in which they must complete a task or else removes the intrinsic motivation if kids feel like they’ll be punished if they don’t finish the goal. Likewise, if a goal is for them to just “do their best!” because they’ll be rewarded even if they don’t do their best, they won’t learn how it feels to be challenged either. Caroline Beaton, who covers Millennials for Forbes, discusses the goal-setting balance on Huffington Post.

Children rely on the adults in their lives to prepare them for the real world. And this means that adults need to be straightforward in what the world actually will be like for them. Of course, this is not say that their future will always be easy and all they touch will turn to gold. However, it does mean that we should present them with a realistic portrayal of what it really is: A life that is filled with hard but rewarding work, an opportunity to develop skills and talents that will benefit themselves and others, a life that is worth living even when it is touch, and that if humble, there will always be people willing to help them. And a real world that is worth living in honestly.