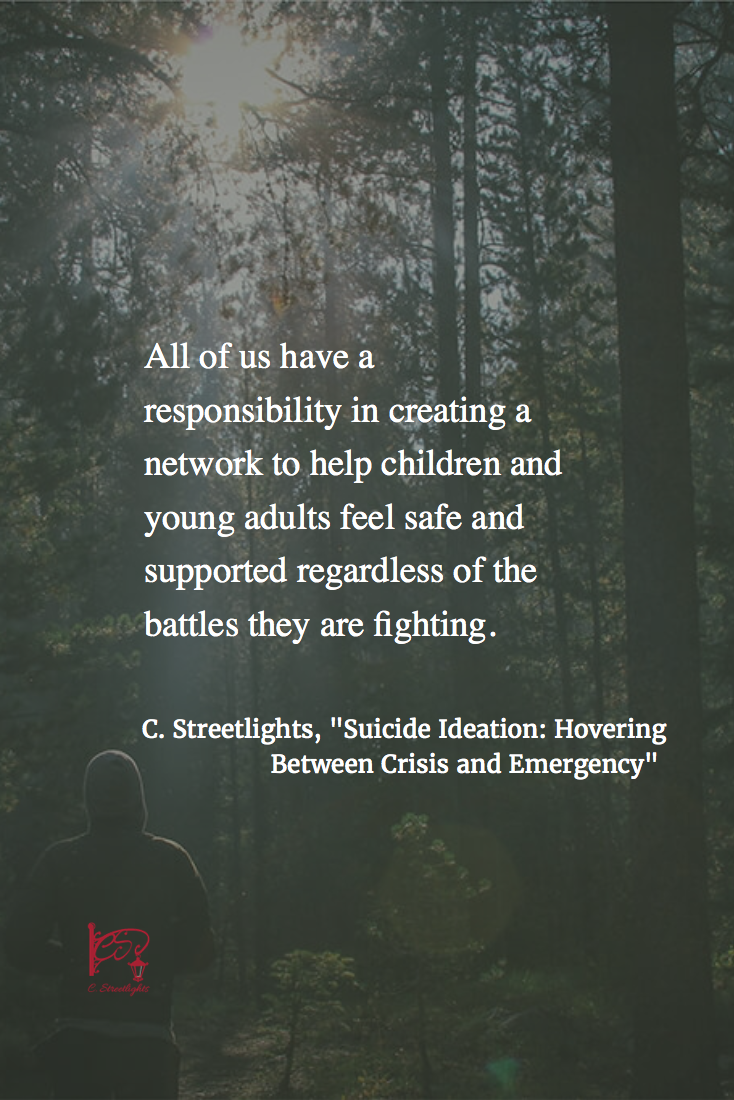 A family that my husband and I know fairly well recently had to make a judgment call that no parent would ever wake up thinking he or she would have to make in a typical day: Is our child in enough danger to herself that we need to immediately take her to the emergency room or can we wait until her psychiatrist calls us back?

Suicide is already an emotionally weighted and triggering topic, but when it is placed in the context of the community we live in, the topic is immediately charged. We live in a highly conservative area that is predominately white and Christian. And while I do not necessarily think this is a bad thing — just like I don’t think it is necessarily a good thing, either — I do think that the characteristic lends itself easily to a groupthink mentality.

These parents are good parents. They’ve done everything right as far as taking care of their daughter. She has had access to mental health care and she takes her medications. They are open about depression and coping strategies. If someone were to go down a checklist of all the behaviors an involved parent ought to take when raising a child with severe depression, you’d see that these parents were doing all of them.

And yet? The suicide ideation still haunted them. It still permeated the thoughts of their daughter. It reached the point of her making plans and coming up with different strategies in order to be successful. Thankfully, it was because of this open relationship between this daughter and her parents that compelled her to reach out to her mother.

Imagine a military team being activated for a mission and you’d have an exact idea of what took place in my friends’ home that day. The father was enlisted, the psychiatrist was called, the mental health hospitals were Googled, and the mother sat with their daughter while she slowly unpacked all her feelings of worthlessness and hopelessness. The psychiatrist said to bring her in and medications were adjusted while she begrudgingly admitted her depression had worsened over the last month, the ideation becoming a legitimate plan over the last two weeks. Her mother noticed her daughter’s stubbornness set in on the drive home and knew she no longer wanted to fight for herself. Her child admitted that there was no point in taking medication any longer. There was no point in trying.

Stubbornness can be a real bitch when dealing with depression.

My friend realized that her daughter more than likely wouldn’t be safe at home even though she told the psychiatrist she would be, and so they drove to one mental health clinic. Unfortunately, the clinic wouldn’t see her daughter because they had insurance and this particular clinic only took patients who were uninsured. They referred my friends to the other mental health clinic. This clinic also turned them away because they didn’t have an appointment.

My friend’s daughter didn’t have the courtesy to let her parents know when her depression escalate to such a degree that she’d begin planning her suicide so that they could make an appointment for her at a mental health clinic. When my friend expressed her frustration about this and pointed out that they were supposed to take walk-ins, she was told that the walk-ins had appointments. But, they reassured her, even though her daughter was in crisis she wasn’t in an emergency; if she was in an emergency than my friend ought to take her directly to the emergency room. They also offered my friend a crisis hotline number.

By this time my friend decided to take her daughter home. Her daughter had slowly become less belligerent and more accepting of the medication change anyway, and my friend recognized that her daughter probably did not need the help of the mental health clinic at this point. But what if she did? What happens to the teenagers who are somewhere between crisis and emergency?

Suicide is currently the third leading cause of death of young adults (ages 15-24) in the United States. I have always felt — and my friend’s experience confirms it — that if a teenager needs immediate help, he or she is more likely to go to a casual mental health clinic than to an emergency room. The moment my friend mentioned the ER to her daughter, her daughter said, “Hell no.” All resources must be made available for teenagers who are contemplating suicide. Nobody should be turned away because they don’t have an appointment.

Thankfully, this family spent the rest of the evening exhausted but playing games together and they are much more hopeful now. Their daughter had been prescribed a sedative to help her sleep through the night which helped almost immediately. She told her mother the next morning that just having slept well made her feel like she had strength again to fight the darkness. Most importantly, she saw that she had people in her life who care for her and who mobilized quickly to get her the help she needed.

All of us have a responsibility in creating a network to help children and young adults feel safe and supported regardless of the battles they are fighting. No appointments necessary.

3 thoughts on “Suicide Ideation: Hovering Between Crisis and Emergency”