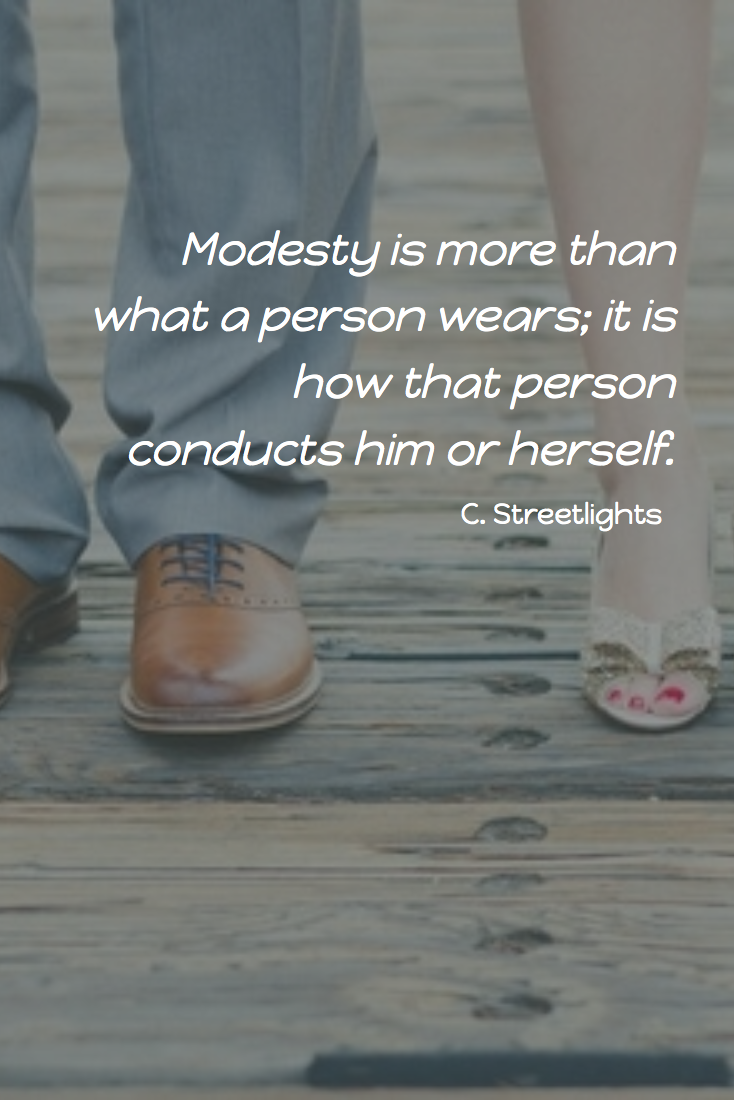 Modesty is more than what a person wears; it is how that person conducts him or herself.

Truthfully I never thought that what I once believed to be a black and white issue such as modesty would become such an inflammatory topic.  I grew up wearing certain clothes that would be defined as “modest” never second-guessing what — or who — defined them as modest and have mostly grown up “normal”.  I wouldn’t say that I blindly followed; it would be more that I never thought about it.  I am sure my schools had dress codes… if they did I know they certainly did not outlaw the crimping irons or neon colors of the 80s and 90s. Sadly.

However, now that I am a parent, specifically a mother of a daughter, I have become far more aware of the expectations and burdens now placed on our young women.  Today, girls and young women are responsible for not only their actions but for the actions of every person they meet as well.  Regardless of age, females are told that their bodies are to blame for even the thoughts that come into the heads of people who see them. This is all in the name of modesty and I call bullshit.

Some young girls begin developing breasts as early as 7 years old. How do we explain to these young girls that their shirts are too low-cut without them asking why? And then, how do we explain why without telling them their shirts are too low-cut because “people” (specifically men) can see their newly developing breasts? We can all anticipate the question that comes next, right? “Why would men be looking there?”

Cue the deer in the headlights look.

Yes, please tell me how you will explain to these young and innocent girls why men would be looking down their shirts. While I agree there will be perverts who will sneak looks down these innocent girls’ shirts, I can also assume that the majority of men will not do so. And if they happen to see a young girl’s shirt gape open, they will not become sexually aroused. Why? Because they are little girls. So the real situation here is not that we want to protect our little girls from the millions of pedophiles that apparently roam en masse on the streets, but impose our version of reality onto them — which is “Hey, little girl, men are pigs and they look down shirts to see boobs and they don’t care who you are, how old you are, as long as you give them the chance they are going to look.” In other words, we are telling little girls it is their fault that men can’t control their basest desires.

Wow. Really? That’s what we want to tell them?  So when I’m told my 4 year old girl shouldn’t wear a bikini because it encourages men to look at pornography, then it’s my little girl’s fault that men objectify women. And all this time I thought it was the men who chose to click on the images. Someone explain to me why kneecaps and shoulders are so tempting on a young woman but not a young man.

Recently, there have been many news stories regarding dress code violations and high school formal dances.  Before I continue, I want to clearly state that I firmly believe it is important for students to follow policy and protocol when it has been explicitly stated and pointed out to them with plenty of time in advance.  This is what helps teach students to become responsible young adults in the world at large. All of us have to follow rules within a system.

In 1868, there were specific skirt lengths that were considered acceptable at certain ages for young girls. We don’t have this “luxury” anymore as far as knowing exactly what to do or wear.  At 37 years old I know by instinct that when I pull what I think is a shirt off of a rack only to discover it is a dress, I probably shouldn’t wear it. Ever. How did I learn this instinct?  I learned it by experience.  Where did I get this experience? From life’s opportunities. (None of which included wearing a dress that could be mistaken for a shirt.)

If an average person were to look up the definition of “modesty”, a reference to appearance is rarely mentioned first.  This is primarily why I am adamant in believing it is time to completely reframe this entire conversation.  If this average person were to actually look up this definition, the first reference will almost always have to do with being free from conceit, vanity, or being unassuming in one’s abilities, being moderate, or a lack of pretentiousness.  Don’t forget that because this next thing will blow your mind:

In 2014, the national average spent on proms rose 5% to $1,139.  $1,139 on one dance.  According to this survey, single parents spent, on average, double than married parents. Explain to me, please, why we are more worried about strapless dresses than we are about teaching our kids that it is okay to spend the equivalent of a mortgage payment? If the argument is truly about modesty, than the issue would not be about hem length or cleavage.  It would be about expense and the spectacle that these high school formal dances have become.  Anything else is disingenuous.

Historically, proms were heavily chaperoned and held only for the senior class in order to “help develop social skills and etiquette” they were “quite plain” and “students would wear their church clothes” (PromWorks).  There is still a great deal of merit in helping students prepare social skills and learning how to dress for certain social occasions.  Just as I have learned what to wear and when through various opportunities, students need to have opportunities as well.  Instead of focusing so much attention on a dress code that is specific only to a school environment or a prom environment, why not change the type of occasion to one that is more conducive to real life application.

Hopefully, students won’t need to attend a funeral but they might need to attend an afternoon tea at some point and know how to conduct themselves at one.  Why must proms or homecomings always be formal, and why must they always be at night?

Instad of insisting on a dress code filled with Do-Nots for an occasion that is impractical for its historic purpose with expectations on modesty decided by cultural standards rather than actual defined ones, why not have an occasion that is, for example, defined as “semi-formal” and then give students a list of Do’s:

And then, here’s a kicker, actually teach students in a homeroom or equivalent when they might need to know when to wear semi-formal attire, such as certain weddings, work parties, holiday parties (depending on the time of day) and so forth. Teach them how to socialize, how to mingle, the art of small talk. Teach young people what fork to use and where to place their napkins, or which side of the chair to sit down on and when to stand up when the hostess walks in the room. How many young adults know what to do when they take a bite of their chicken and find a bone in their mouth or which glass is the water glass?  Modesty is more than what a person wears; it is how that person conducts him or herself.

Why place so much emphasis on young women covering their bodies so as to prevent salacious thoughts of others when we can use this important time of young men and women’s lives to actually teach them what is appropriate.  Not because it is modest.  Not because it is moral.  But because it is teaching them how to be adults who are able to function in the real world without spending thousands of dollars.

I would have had so much more use for a couple pairs of dressy slacks or a cocktail dress after I graduated high school than formal prom dresses that I never wore again.  Even if I could fit in them. My guess is that most young women would too.