Every morning, as I drive my child to school and back, I pass an old brown El Camino parked in a random driveway. My heart races as my foot accelerates. I can’t move fast enough past that foreign, yet familiar, car.

Innocence, sweet soft cheeks, I kiss my boy as he holds me tight before he turns to his friends, off for a day of fun and learning, imagination his natural ally. A dreamer, my boy. He loves to be my protector when it suits him, though dark, nighttime fears soon swallow him up and he snuggles tightly into me, afraid of the unknown, as he drifts off to sleep.

The car reminds me, in its way, a daily symbol of the monster who lived next door, his El Camino parked in the driveway. I was barely older than my boy when the monster trapped me in his nest of scooter rides and lollipops, a daughter my age with an invitation to come over and play, a cold swimming pool on a brutally hot day. Opportunities.

I didn’t share what happened to me until I had to – sheriffs knocking at our door. I didn’t say anything then, either, because of the shame. Shame is a powerful emotion, stronger than fear. I often wonder what it takes to be a police officer, to coax a story out of child mired in shame so thick they reek of it, that child-like scent of innocence and purity you can smell in their sweet hair, gone.

There were trials – I testified twice – yes, twice. Civil and military, because he was an army officer and he carried a gun. Because I was old enough to testify, to verbalize what he had done. He went to jail for two years and lost his pension.

My family continued to live next door to them for many more years. I went to school with his children, even after he returned. A glass wall of silence shattered with glares of hate, as if I had done the crime. As soon as I could move out for college, I was gone.

In my strenuous ignorance in dealing with it all, I dissociated by immersing myself in athletics and school and boys and weed and – whatever could keep me busy. And numb. Flashbacks, nightmares, PTSD, panic – this was part of growing up, since I didn’t have names for these things.

Deal with it, it wasn’t that bad, it could have been worse.

College, career, marriage, children, divorce…it wasn’t until I gave birth to my first child that the depression and anxiety hit with a vengeance. What if the same thing happened to her? How could I keep her safe? I started to spin and eventually, became inconsolable, incapable of functioning outside of that mindset. I sought help. Thirty years after my experience with the monster, I finally, finally realized I needed help.

That child, my sweet loving, artistic daughter, is almost seventeen, and my boy is almost wow, eleven. I am overprotective, and I’m okay with that. My children know I was sexually abused when I was eleven. They don’t know the extent because they don’t need to.

They know I wrote two books (so far) about it, Broken Pieces and Broken Places, that I’m writing Broken People. They know I started #SexAbuseChat on Twitter, and that I’m the director of the Gravity Imprint for Booktrope, bringing stories of trauma and recovery to life. It doesn’t really mean all that much to them, and that’s okay, too. “Mom is a writer and stuff,” my boy tells his friends.

It’s okay that they don’t really understand the gravity of everything that happened to me, because I want them to maintain their innocence for as long as they can. They still believe in Santa Claus, though my kids are questioning the Easter Bunny (they call him Sketchy Bunny). It’s good to laugh about such things.

There’s not always justice in this world. Monsters still exist, children are still abused. Awareness is greater now than when I was a kid, and if I have had some tiny part in that, whether it’s through my books, or being an outspoken advocate for children and survivors, then I’m honored.

All I know is that every survivor has a right to tell their story because we did nothing wrong.

Touching on subjects such as love, loss, grief, abuse, and relationships with raw honesty, Thompson write what scares her. 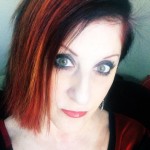 Best selling, award-winning author and advocate Rachel Thompson writes about surviving childhood sexual abuse in poetry and prose. Her books, BROKEN PIECES and BROKEN PLACES are both best sellers and the recipients of multiple awards. She's currently working on BROKEN PLACES. Touching on subjects such as love, loss, grief, abuse, and relationships with raw honesty, Thompson write what scares her.
View all posts by Rachel Thompson →