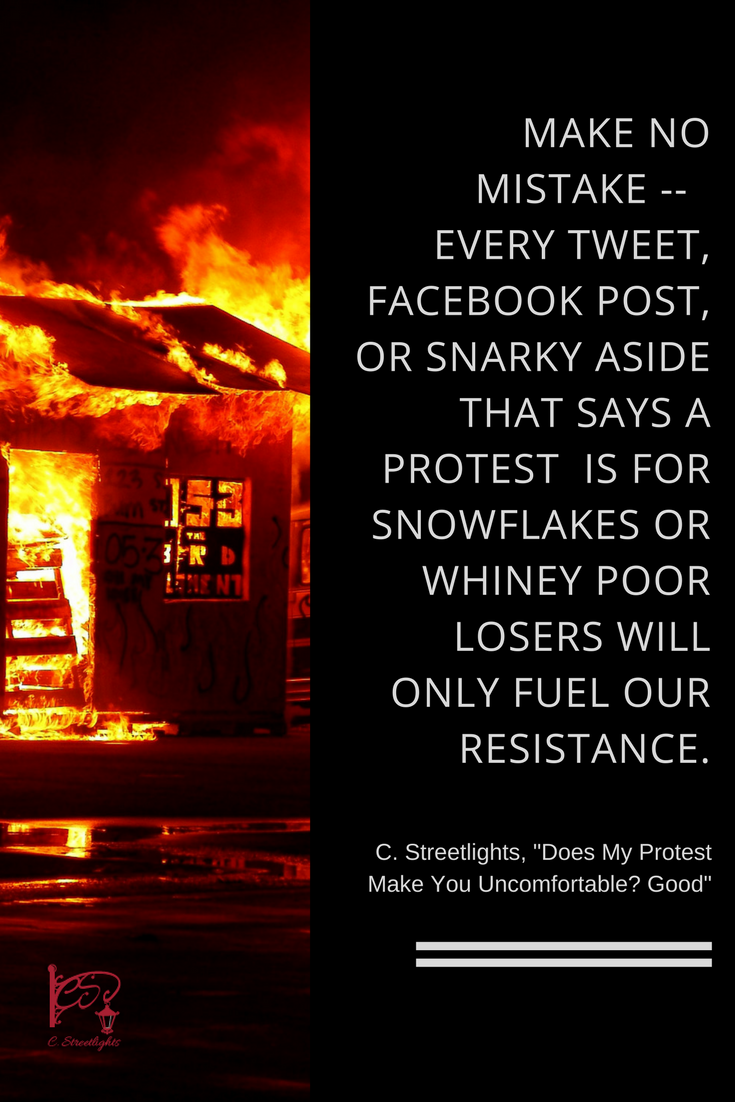 There’s been a lot said about our right to protest and who has the right to do it, so pull up a chair and start taking notes because I’m about to add to the conversation.

Myth of the Perfect Protest

A disproportionate amount of our country’s population lost their minds when Colin Kaepernick began to quietly sit and then kneel in protest during the National Anthem in silent protest to support people of color who face oppression currently in the United States:

For some reason, opting to not stand for the National Anthem or Pledge of Allegiance is an automatic sign of disrespect for the military and its sacrifice. People are unable to separate the two without recognizing that one of the best ways to honor the military’s sacrifices is to ensure our nation’s leaders are protecting the rights in our own country while the military protects the rights of others.

While people were outraged over Kaepernick’s silent protest, saying it was pointless, Kaepernick was busy doing more than just taking a knee. Learn about his activism and advocacy here and here.

Apparently, silently choosing to not participate in the National Anthem is not an “acceptable” protest in our country — in spite of it being our protected right to sit out. If we’re not allowed to be quiet while protesting than certainly a planned and organized protest march would be on the list of approved actions, right?

Yet it isn’t. We can’t be quiet and we can’t be loud without being accused of lawlessness, bribery, laziness, or the inability to think for ourselves. The Black Lives Movement protest marches are only for “thugs”, the anti-Trump protestors were all paid to be there, the Ferguson protests were filled with looters, and Bernie’s protestors were all freeloaders.

Somehow, the logic goes, these rowdy protestors are not grateful for being in this country and the freedoms they have when they are out marching, so they should be patriotic and not protest at all. Protesting shows disrespect to the government.

Protesting should be a private choice, between the protestor and his or her conscience — not a publicity stunt. This is another complaint I’ve heard recently. An effective protest is one that isn’t shared or publicized. Because that makes a lot of sense, right? But this argument explains the overall discontent some had when some Democrats participated in a sit-in led by Rep. John Lewis on the House floor to protest Republicans’ legislative inaction on gun control, calling them “rogue” and disrespectful to the office they held.

So let’s review how we should exercise our right to protest: we need to be quiet but not do anything public or share what we are protesting against, we can’t do anything at all that might imply we are unhappy with our government, and above all else, nothing we do should at all can even remotely be connected to the military — even tangentially.

Many who subscribe to any kind of Perfect Protest Myth have fallen into the Argumentum ad Populum (argument to the people) trap. What makes this logical fallacy so effective is that it incites the feelings and enthusiasm of a group rather than building an actual argument. In the varied approaches that one can use in Argumentum ad Populum, no evidence is ever supplied to support an argument — only assertions about the people who agree or disagree.

We can blame the media for the lack of distinction between a protest and riot, though the general population’s lack of common sense is largely to blame. I mean, if people are watching a news report on the Democrats’ sit-in and call it a riot than I would say those people are stupid. If those same Democrats begin walking down Pennsylvania Avenue with signs, it would still be a protest, right? It doesn’t matter if protestors are sitting, standing, or walking — it’s still a protest. Not a riot. Protests are organized actions to speak out against injustices. Sometimes they are an open  resistance to an organized government or ruler, like we’ve seen in response to the Dakota Access Pipeline.

And there are riots. I mean, I actually have to point out the difference here, which is quite sad. Riots are violent disturbances of peace. There intent is to cause destruction of property and possibly even loss of life. Many riots will splinter off from protests but are not the same as protests. What was once thought of as mob mentality by social psychologists is now thought to be too simplistic in terms of being the cause of rioting. What should be simple to understand, however, is that they are not the same as protests.

So why do people insist on saying that rioters are protestors?

The 1st Amendment (Just Not For You)

The uncomfortable truth is that people do, in fact, recognize that protesting is a guaranteed right protected by the First Amendment, but don’t want all people to exercise it. If people exercise their right to protest and someone is uncomfortable with it, than this means one of two things are happening:

We hear a lot of criticism and negativity when these two groups (there are more, I am only describing two) are confronted with “the other people” protesting. They don’t like it. Those people don’t deserve to have the same rights as they do. Those people aren’t even protesting (see Myth of the Perfect Protest). If they aren’t protesting then they must be rioting, right? And since there was rioting after the Rodney King protests in 1992 and in Ferguson, than it stands to reason that there will be rioting involved in every protest. Obviously. Therefore, according to the Uncomfortable Truthers, let’s just call it what it is: rioters are protestors.

Yeah, I really did just spit Latin at you. It means “After this, therefore because of this.” It sounds better in Latin. Another logical fallacy, it occurs when a person assumes that because the first event preceded the second event, than the first event must have caused the later one. Sometimes it does cause the second event, but sometimes it doesn’t and when we go around “adulting” in this life we have to recognize that. When my son was little he just knew that if he ate something with coconut that he would throw up because he threw up after eating some shredded coconut once when he was about 4-years-old. He was convinced the shredded coconut was some kind of alien concoction — and to be honest, it kind of is. Except he didn’t throw up after eating some coconut candy when we went to Hawaii a couple years after the shredded vomit incident. He had no idea there was coconut in the candy until I told him. He doesn’t eat any candy I offer him anymore.

People who insist that protestors will riot are committing post hoc, ergo propter hoc, assuming that because one protest led to riot throw up that all protests will become riot throw up.

Whether people approve of protests or not, our nation is entering a dark time and the people who are resisting the darkness don’t need people’s approval in order to protest. Make no mistake — every Tweet, Facebook post, or snarky aside that says a protest is for snowflakes or whiney poor losers will only fuel our resistance. I find it hard to believe that people truly can’t tell the difference between rioters and protestors, that people are that stupid. Don’t forget that perception becomes reality, and we have a choice in whose perception we adopt. We either rely on our own or somebody else’s. When it comes to deciding whether or not to protest, I rely on my own.

2 thoughts on “Does My Protest Make You Feel Uncomfortable? Good”