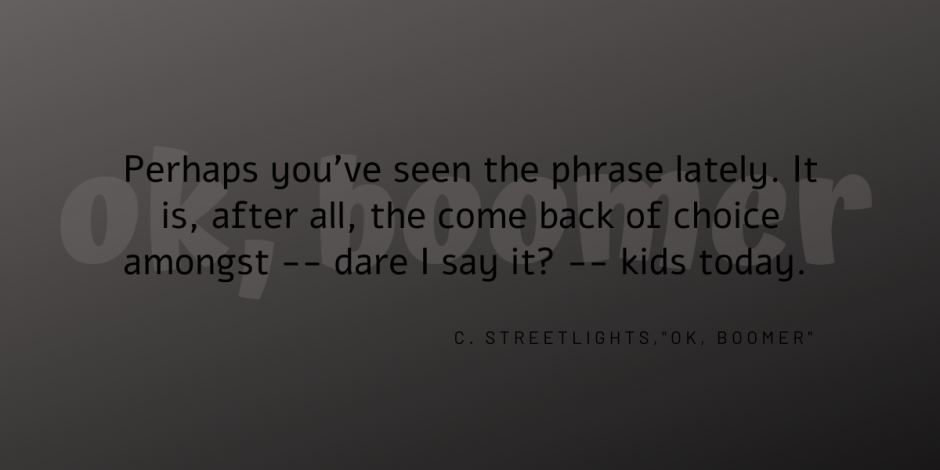 Perhaps you’ve seen the phrase lately. It is, after all, the come back of choice amongst — dare I say it? — kids today. If faced with an opinion they do not like or one grounded from “the olden days,” the purveyor of fine discourse dismisses the speaker with the wit of the ages: “Ok, Boomer.” At first, the retort had some meaning. It was a way to assert some pride in the face of hearing from the Baby Boomer Generation, yet again, how Millennials and members of Generation Z were ill-prepared for real life and were destroying the country.

According to Wikipedia, “‘OK Boomer’ was popularized as a reaction to a video on TikTok of an unidentified older man, in which he declared that ‘millennials and Generation Z have the Peter Pan Syndrome: They don’t ever want to grow up; they think that the utopian ideals that they have in their youth are somehow going to translate into adulthood.'” However, the phrase has been used earlier then 2019. In fact, it was supposedly used as early as 2015 on 4chan. And I get it. It’s frustrating to hear from the previous generation about how your generation is screwing up. I’m Generation X and always heard about how apathetic we were and always on drugs. But, I mean, if your childhood was filled with nuclear bomb drills and watching a space shuttle blow up on live television, you’d feel a little hopeless and want to be doped up, too.

And so I understood when I saw the first Ok, Boomer memes roll out. Many of them were humorous and they were in response to the worst the Baby Boomer Generation had to offer: the racism, classism, and extreme conservatism. I didn’t feel like they were ageist; I felt like they were calling out a generation just like Millennials and Generation Z had been called out.

That is until, like most clever things, the meme was appropriated by those individuals who didn’t know how to cope with anyone challenging their opinions or world views and simply retorted, “Ok, Boomer” to everyone. It didn’t matter if they were responding to a Boomer or not; if they didn’t like what they heard they just tossed off an “Ok, Boomer” as if that was the end of the conversation. In reality, it just made them look like petulant child who was unable to hold their end of a chat unless it went their way.

Ok, Boomer is on my mind because , a young man with an unfortunate goatee tweeted something grossly irresponsible about mental health, and on anxiety in particular, the other evening on Twitter. I would share the tweet here but he has since deleted it. In general, he said that anxiety is easy to solve because people just need to love themselves and it would go away. This is a disingenuous statement. First of all, there is a difference between feeling nervous and anxious, and second, there is a difference between feeling anxious and having an anxiety disorder. You can not lump anxiety all together and then just say “love yourself” and you’ll be cured. All this does is reinforce the stigma towards mental illness, that people don’t have an actual illness that is present in their brains, and that everything is within their control.

Rather than listen to two well-educated women who have first-hand knowledge and experience with mental health issues and how they pertain to sexual trauma, and become better informed himself, he wrapped himself in his own arrogance with “Ok, Boomer.”

He could have had an honest exchange with either one of us or both, learning about how the brain works differently in those with an anxiety disorder and walked away better informed, but instead, he tried to dismiss two intelligent women with plenty of information by saying, “Ok, Boomer.”

All of this was frustrating, but really it was disappointing and sad. Here was a young man who is supposedly from this Millennial Generation–a generation that is supposed to be more open minded and better informed about health care, self-reflection, and compassionate, and yet he behaved more stereotypically “Boomer” than anyone I’ve encountered in a long time. By doing so, he negated any possible healthy conversation regarding mental health and illness, and so anyone in his Twitter timeline who could have really benefitted from that potential thread lost out on that opportunity.

What is even more frustrating is that this individual continued to try to troll us literally at the same time as Rachel and I were moderating our #SexAbuseChat on Twitter where we chat with other survivors of sexual violence about different topics each week, including mental health and how it’s affected by trauma. The man is truly tone deaf and obtuse. It should be no surprise that he was trending today on Twitter for being sexually inappropriate with minors and white supremacy.

To me, the issue is not necessarily having a retort when faced with an annoyance. We all get annoyed and we all get trolls. However, there is something to be said about the old maxim, “Don’t feed the trolls.” The issue is one of saying, “Ok, Boomer” just out of your own sheer ignorance (and to the delight of your own ignorance). How are we to learn from each other, and yes, that includes learning between generations, when we are too quick to shut each other down as if the other person has no value?

We are at a precipice in our country, one at which where we can continue to devolve into uncivil masses like we have been, or to actively decide to listen to one another even if we might not agree. And then, if we don’t agree, disagree in a far more humane and respectful manner. I do not think we can continue on in the way we have been, frankly encouraged by our current administration, without permanently changing our country’s DNA. Dismissing someone with “Ok, Boomer” simply because she has pointed out to you that your opinion is an irresponsible one, and, by the way, here are the reasons why, shuttles us further down the road of permanent arrogance and incivility. We can’t allow it.