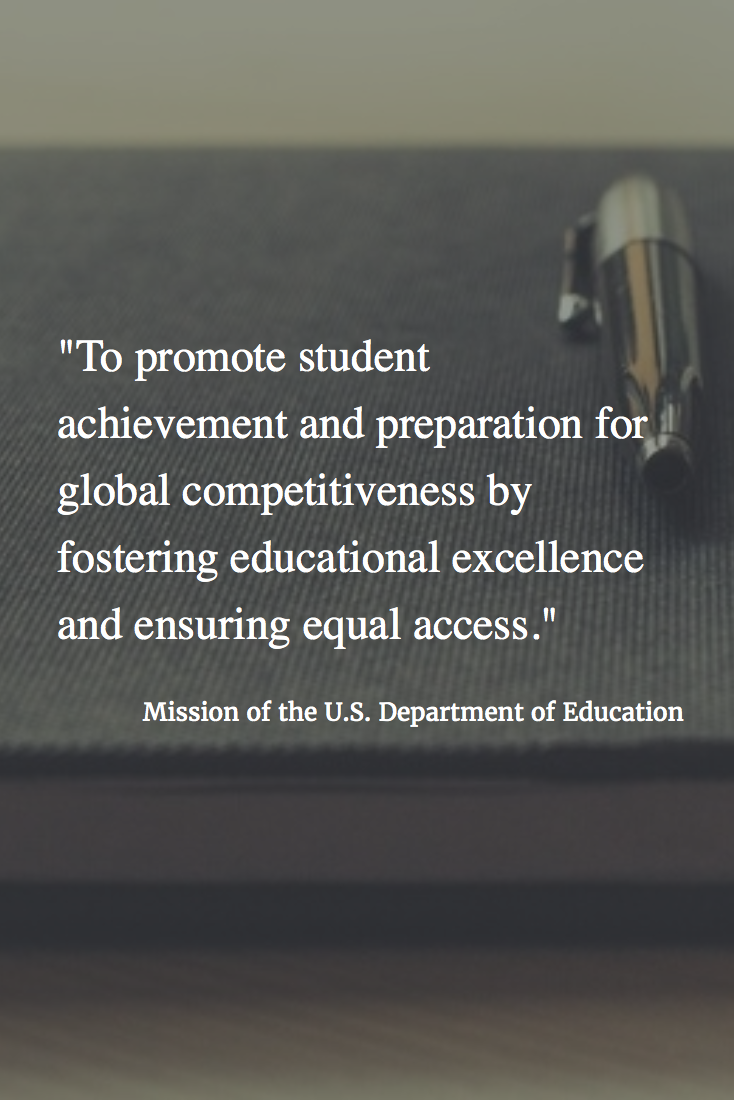 The U.S. Department of Education came up last night during the GOP’s debate. As usual, there were promises of abolishing this department along with others, but these promises are indicative of how little the GOP candidates and their fans know about what the Department actually does or what its purpose is.

History of the U.S. Department of Education

When people claim that we don’t need a Department of Education because students “learned just fine without one before the 70s” — as someone pointed out to be on Twitter last night — it is a clear indication that these people have no idea of what the Department’s history is.

The political and social changes between the 1950s and 1970s expanded federal funding for education. Some of these federal funds included increased funds for science education to help the United States compete with the Soviet Union in space exploration. President Johnson declared a War on Poverty, calling for an improvement on education for poor students from early childhood through the postsecondary levels. These particular programs were expanded in the 70s with national efforts to help minorities (racial, women, people with disabilities, and non-English speaking students) to gain equal access to education. Finally, Congress passed the Department of Education Organization Act in 1979, creating the Department of Education that we know of today and that opponents claim we don’t need any longer. As of mid-2010, the Department has nearly 4,300 employees with a budget of about $60 billion. We now have 50 states and over 98,500 public schools (elementary and secondary). Total.

Purpose of the U.S. Department of Education

There are many assumptions of what the Department does and very little knowledge of what it actually is responsible for. Some of this is lack of knowledge is caused by politicians who disseminate inaccurate information while a great deal more of it is caused by hysteria over government overreach where there is none. To clarify, the Department of Education’s stewardship is over four main areas as pursuant to Public Law 96-88:

These are the four purposes of the Department of Education. By abolishing the Department, these burdens would fall on the individual states and otherwise create chaos and more government within each state. Further, there would need to be some other federal entity to ensure schools have access to federal monies to adequately fund federal programs.

Oh, that’s right. Isn’t that the really the point? By eradicating the Department of Education, thereby eliminating any federal entity to oversee any federal funds for federal programs, it would be one step closer to eliminating the federal programs completely and “move that right back to the states”, as people say. Because, as opponents to the Department of Education say, education is a state right and should not have any federal interference at all — including federal programs. And because there would be no U.S. Department of Education, there’d be no way for citizens in any state to hold schools or districts accountable to federal statutes that prohibit discrimination because no state agencies would have access to federal funds. Suddenly, it becomes an education only for those who are more equal than others. Get the picture?

This does not even begin to address the chaos that comes from no data or research being collected.

What Can the U.S. Department of Education NOT Do?

We hear a lot of fear mongering over what the Department is about to do or what it has done, and this is why it should be abolished. But let’s go over some important points of what the U.S. Department of Education is actually legally not allowed to do.

No provision of a program administered by the Secretary or by any other officer of the Department shall be construed to authorize the Secretary or any such officer to exercise any direction, supervision, or control over the curriculum, program of instruction, administration, or personnel of any educational institution, school, or school system, over any accrediting agency or association, or over the selection or content of library resources, textbooks, or other instructional materials by any educational institution or school system, except to the extent authorized by law. (Section 103[b], Public Law 96-88)

The Department of Education can not:

But what about the heated topic of THE COMMON CORE? Every single GOP candidate has mentioned the Common Core. I can’t even tell you how many times I have seen parents share photographs of math problems that they swear will destroy the fiber of American patriotism because it is an example of Common Core. If the Department of Education is not allowed to determine curricula or state education standards, then why the hell do we have the devil’s own Common Core? (I actually love the Common Core so I am only imagining what anti-Common Core inner dialogue might be.)

The U.S. Department of Education and the Common Core

Let’s go back in time to 2009; it’s important. In 2009 state leaders (governors and state commissioners of education) from 48 states, two territories and the District of Columbia came together and decided that it would be beneficial to the students in their states and territories to develop common, college- and career-ready standards in math and English language arts. The first worked through their membership organizations (National Governors Association Center for Best Practices and the Council of Chief State School Officers). The development process included defining expectations for what every child should know and be able to do when they graduate from high school. From this point, they created content standards for grades K-12 aligned with these expectations. States then relied on workgroups of educators, representatives of higher education and other experts t0 write the standards with significant input from the public (2009-10). Once this process was completed, each state appointed a validation committee to review the final standards. The final standards were published in June, 2010 and available for each state to review, consider and voluntarily adopt.

Did you notice who was absent from this process? The U.S. Department of Education.
It is also voluntary to adopt them. Not all states have chosen to adopt these standards. While some claim that the Common Core is part of the Race to the Top Grant Initiative, this is not true. Race to the Top applicants were given advantage if they showed they already had college-/career-ready standards in place, but it was not a requirement that applicants utilize Common Core. Further, some applicants who didn’t get the grant still adopted Common Core.
The most important distinction, however, has to do with basic terminology. Common Core Standards are standards, not curricula. Standards are shared goals or expectations for students to achieve at each grade level. The easiest way to remember the difference between standards and curricula is this: standards is the what students need to learn and curricula is the how they will get there. In other words, curricula is the specific lesson planning on how to achieve each standard.
GOP candidates can  huff and puff all they want to blow down the Department of Education but it will not get rid of the Common Core because the Common Core was state-led, state-written, and state-adopted.

So what does this all mean and why does this matter?

There’s a reason why politicians promise the moon and only deliver its cheese: because they either don’t know what really matters or they really want something more than what they’re promising. Is it possible that these candidates honestly don’t know how the Department of Education or its non-existent role in creating the Common Core? I think it is possible that they truly believe the Department of Education wrote the Common Core and that the standards are the same thing as curricula. What’s more, I honestly believe that these men think that teachers have no autonomy at all in regards to the Common Core and have to read a script in order to teach. That’s how out of touch with reality I believe them to be.
However, I also believe that possibly for some of them, they want to eliminate the entire Department of Education for more unethical reasons that have nothing to do with saving billions of dollars or because of states’ rights. I think it is because they are hiding behind the premise of fiscal responsibility while knowing that millions of disabled schoolchildren will no longer be protected by federal statutes, homeless children won’t have rights to education, and schools would no longer be forced to teach English as a Second Language. And the average state tax-payer? They can see their taxes go up in order make up the difference in funding their local schools and state agencies to govern those schools.
So when someone on Twitter tells me that I don’t know anything about the U.S. Department of Education because “kids were educated just fine before the 70s without it”, let me tell you something: I sure know a hell lot more about it than you think I do.

2 thoughts on “What You Need to Know About the U.S. Department of Education”