#Reverb11
A moment in time. Tell us about one moment that you lived in 2011 that you will neverforget.
There were moments of this last year that have felt like thelone sock lost in the wilderness – the missing sock that seems to lose it’spartner in the dryer and is never found again. I feel that way about parts of 2011. There is the entire month of June, for example, that I spent loaded onmorphine to stop contractions.  June justkind of fluttered away with ever kick and roll in my belly.
But then there are other moments.  Moments that are permanently attached to myheart as if they are new chambers for my blood to pulse through.  Three in particular.
Moment one?  I wasdying while my baby was fighting to arrive early.  I was being prepped for surgery, the epiduralwas in and I could no longer breathe.  Myvision was fading, my hands were turning white. I was gasping.  I could see thescreen with my blood pressure.  Down,down, down the numbers were falling. Past that screen I could see the monitor for my baby.  The little etches showing her heart rate andher contractions.  Moving around, constantlymoving.  I could hear her heart beating.  My hands were grasping the hand rail.  Tears were falling.  I had to be here for my kids.  I finally whispered, “I can’t breathe.  Is this normal?”  Shots of epinephrine.  I was back. The chain around my heart fell away and my eyes never left my baby’sheartbeat.
The second?  When thebaby was born she was taken to NICU straight away because her lung was filledwith fluid.  She was immediately put on arespirator and I couldn’t swoop her into my arms and keep her there.  I couldn’t hold her for about threedays.  All I could do was hold her littlehands or her feet.  My heart ached.  Finally, the moment came when the tubes cameout of her lung and I could hold her in my arms.
Finally.  The worldheld still and my girl was where she belonged. She curled up against me, skin against skin, and quickly fell back tosleep again after taking a deep breath against me.  We rocked and rocked and rocked.  The stars turned into little bells that nightand chimed just for us.  They’re chimingstill if you listen just right. 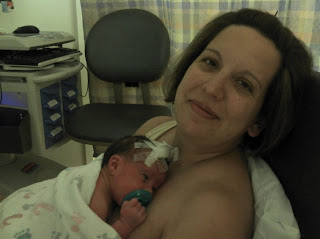 And the last?  My sonwasn’t able to see his little sister for many days during her stay in theNICU.  He was allowed one quick firstvisit after she was born and then he was ushered out.  The NICU policy is no sibling visits untilthe weekend and only after immunization records are submitted.  Sadly for him, the baby was born on aSaturday and we didn’t have a chance to submit his records in time.  He had to wait the whole week and was dyingto see his sister.  He was soanxious.  Finally, the weekend rolledaround and a partnership was formed for eternity.
My world in one spot, entwined with one another.  My boy loves his sister with his whole littlebody and then some.  He fed her androcked her.  He sang to her and promisedher the moon.  If I know him the way Ido, he will figure out how to deliver it to her, too. 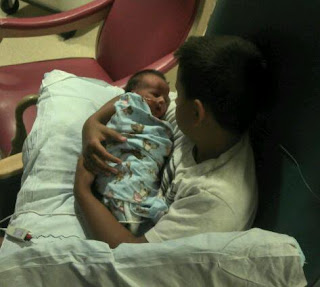 These three moments, I will never forget them. My bloodpulses through them, rushing, and helps me live.