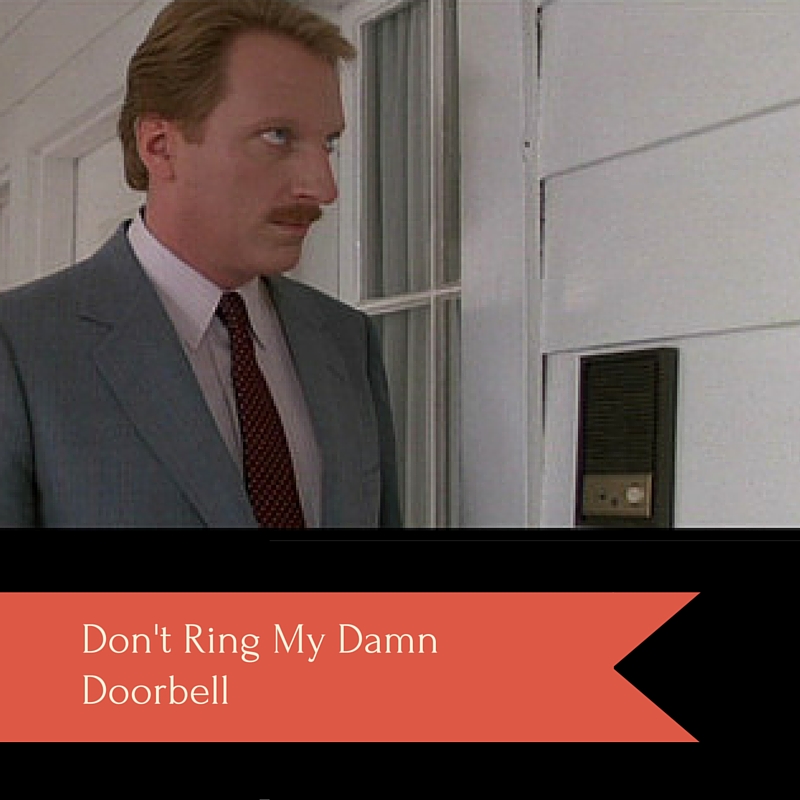 I live in a culdesac of awesome. I have rad neighbors. My kids know every single person who lives in every house within a five house radius which is pretty sweet radius if you ask me. I have worked hard to cultivate the “Mean Lady” reputation but I still have kids playing in my front yard and I love every squeal and holler. I don’t love the Otter Pop wrappers left behind but I’ll miss them when all the kids grow up and finally leave.

There is one thing that I can’t wax bucolic over, though. My doorbell. Right before my baby was born and I was heavily laden with womb, people felt compelled to ring the damn bell eleventy-billion times. On bedrest and weighing approximately five times my original size, I was not quick on my feet unless it involved guacamole. By the time I got to the door nobody would be there and swear words fell out of my mouth.

I thought the matter was resolved once I evicted the child from her baby condo but the excessive doorbell ringing continued along with the swearing and so I bought a simple sign:

Other than an obnoxious solicitor who also doesn’t take time to read the “No Soliciting” sign or a wee child who has not yet learned to read, the sign has worked well in the last five years. But more importantly than allowing me to stay on my lazy butt, The Real Reason why I have kept this sign in place is to preserve my mental health.

My House, My Rules

I speak openly about my mental health and the battle I have with depression and anxiety not because I enjoy marinating in misery but because it is vital for those who struggle with their mental health to be able to see others like them. Why? Because too often we feel like we’re the only one. I advocate for mental health because I need to be a warrior for other warriors.

And it’s always okay to clearly state your boundaries and then enforce them. So stop ringing my damn doorbell. Loud and sudden noises — like the doorbell — are not okay for me. They escalate my anxiety disorder. They make me feel scared. They heighten my flight or fight response. The doorbell especially is a PTSD trigger for me. I don’t like it. I feel threatened in my own home — a place I have nurtured to feel safe in. A haven.

So stop it. Get your own damn bell.

My Mental Health, My Needs

Individuals who struggle with PTSD often have an exaggerated startle response. Here’s an example: newborns arrive with a built-in exaggerated startle response because they don’t typically hear loud noises while cruising around in the womb. We’ll see them jump as if they’re falling. We’ll say, “Awww… it’s okay!” then coo and make ridiculous little faces at them until they are calm. PTSD folks often jump — or startle — but nobody coos at us. Instead, they tell us to get over it and, ironically, tell us to quit acting like babies. On top of having exaggerated startle response, PTSD warriors will often experience hypervigilance — every single moment of their lives. Imagine Mad-Eyed Moody on speed and you have a small glimpse of what this is like. PTSD, coupled with hypervigilance and an exaggerated startle response, creates an exhausted human being simply because the individual is on a constant emotional lookout for danger or a threat to her physical well-being. To put it simply (and without going over the many studies and brain scans) a person like me feels the exhaustion of post-adrenaline rush constantly. After I experience a trigger, like the doorbell, I simply don’t have the adrenaline available to go through an adequate flight or fight response.

Instead, my anxiety worsens. Or worse, I have a full panic attack. Sometimes, I will go into an agoraphobic cycle when I won’t leave my house unless absolutely necessary. If I am triggered and then triggered again, such as the doorbell rings and it’s an aggressive salesman, I might not even leave my own bedroom unless I absolutely have to — because eating is nice and the fridge is in the kitchen. I can experience flashbacks to my specific traumatic event(s); I’ll lose sleep; I’ll have nightmares; I’ll vomit for no reason.

All because people seem to think their right to ring my doorbell is more important than my right to experience peace in my own home, I will flashback to my specific traumatic event(s) and experience awesome things like lose sleep, have nightmares, and vomit blood. So that’s cool, Doorbell Ringer.

My Brain, My Boundaries

Please note: This is not my actual brain.

Think of this fMRI in two ways: Right Side, Activated and Left Side, Deactivated:

When I say I’m losing my marbles, it’s because I am actually losing marbles. Imagine my marbles being my adorable grey matter filling up my cranium space because that’s a nicer image than “grey matter”. When people have PTSD we actually do lose grey matter.

I try to have a good sense of humor when it comes to my mental illness, however I have expectations and boundaries set for my home  in order to keep me mentally healthy. I am sorry if people are so self-important that they somehow think they have a vote in how I keep myself healthy or my boundaries hurt their feelings. They’re welcome to come over to chat about it their issues but I’ll only open the door once they knock.