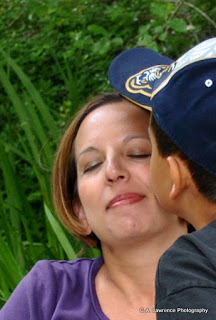 My child is an easy child.  I have been blessed beyond measure.  We had very few sleepless nights with him as a baby.  He teethed well, often sprouting a couple at a time with little fuss and fanfare.  He potty trained quickly.  He didn’t struggle with “colic” or ear infections.  He traveled well on car trips and was obedient in restaurants.  Plus, for all who know him, Ethan is plain, down right adorable.  As close to the perfect child as possible.

Lately, he is a pill.  Now, in perspective, Ethan at his naughtiest is still pretty damn good.  However, it is still unusual because he is so naturally good.  I am earning my motherhood wings lately.

I know that Ethan still has a great deal of childhood left ahead of him, yet at the same time he is still leaving a great deal of it behind him.  He is entering the dreaded and foreboding territory of pre-puberty.  Hormones are running amok in his little body.  It’s bad enough that he smells like dirty little boy when he comes home from school, but he has to be emotional too.

The emotions swing like a wild pendulum on crack cocaine.  One moment he is happily playing with Legos, the next he is crying in a fit that we don’t like him anymore.  All because we asked him to clean up when he was finished.

He’s like a tiny little body of hormone exploding at every turn.  I’m afraid to look at him for fear of setting off a nuclear reaction.  Scientists don’t need to split the atom for nuclear fission. They just need to sideways glance at an almost 10-year old boy in order to create a blast.

This is just pre-puberty. What’s going to happen during the real thing? And will I survive it?  I really don’t know.  My fear is genuine.  It’s for this reason I am frantically gathering my food storage and mapping out escape routes. Where can I hide?

What am I saying?

Our culture is one in which we have treated these periods of childhood as “Oh, that’s how boys are.” Or, “Oh tweens!” Or, “Ah! Teenagers!” Almost as if it is a period of life that must be endured on the part of the parent and indulged freely by the child.  No.

One thing I’ve noticed with my Ethan during this newly tumultuous time lately is that he is just as confused by it as I am.  He knows that this truly bizarre just as I do.  He doesn’t know what to make of all these strange emotions and topsy-turvy feelings.  It would be irresponsible of me, as his mother, to facetiously say, “Well that’s just how it is right now, so just feel what you feel.”  More, now than ever, he needs to be held tightly and told he won’t explode.

By being cavalier in tossing aside our kids’ development because we don’t know what to do with them, we are not doing them any favors.  This is a time to be mothers, to do the hard work, to be patient through the melt downs.  To say when things aren’t appropriate.  Not because they’re going through puberty, but because they’re learning to be human beings.

It’s just a few tears, a few tantrums, a few uncomfortable conversations.  But it’s a lifetime membership in the human condition.  This is what is mamahood.

I defy any hormone that will try to take that away from me.

One thought on “Mamahood”