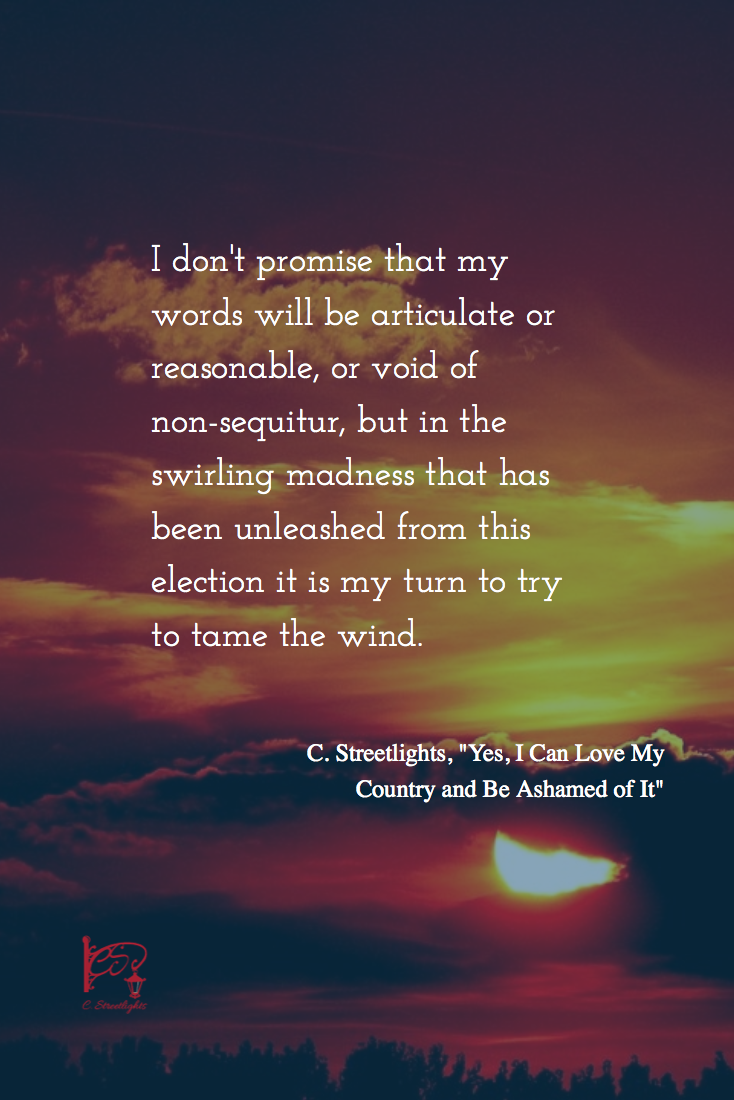 As many Americans, I have struggled with trying to find a sense of meaning in what happened on Election Day this week. And while I still have no answer at all that could possibly begin to explain what I feel is a certain madness from my fellow citizens, I do know I am only left with my own emotions that I must try to sort out and reconcile if I can only begin to hope and continue believing in my own country’s representative democracy.

And so I am back here to an empty page, much like I was seven years ago when I felt devastated and betrayed for far different reasons, chasing my cursor across the season in a blind hope that I might be able to unravel that knotted strings of my thoughts and feelings. I don’t promise that my words will be articulate or reasonable, or void of non-sequitur, but in the swirling madness that has been unleashed from this election it is my turn to try to tame the wind.

All of us are responsible for what took place on Election Day and to say otherwise is negligent. We had a long primary season in which nobody took Trump’s candidacy seriously except for those who supported him. All other viable candidates were not fairly vetted, and we all know this to be true, because the media — ALL media — focused on Trump like a circus sideshow. He didn’t become the nominee because he was truly the best the GOP hd to offer; he became the nominee because we have a sick fascination with wanting to see what would happen in a train wreck. And the news organizations, ALL OF THEM, enjoyed their ratings soar. It doesn’t matter who the Democrats chose as their nominee, Trump would have become a media hydra.

Let me repeat that: It doesn’t matter who the Democrat nominee was, Trump would have become a media hydra.

We are all responsible for the legitimate fear that people in this nation are feeling at this moment in the shadows of a Trump Administration. Because we as an entire republic have not stood up visibly and vocally enough to our legislators and community members and said that they will not tolerate the disenfranchisement of our most vulnerable, our most vulnerable now feel they are no longer safe in their own country. That is on us. That is our fault. And we need to take responsibility for that and make it right. Our neighbors and our friends should not be feeling afraid right now. They should be feeling secure in the knowledge that their community will protect them and their rights.

We are responsible for allowing FAKE NEWS replace REAL NEWS. Instead of arguing with people on Facebook or Twitter about a fake news source, or sharing a fake news site to laugh about it, we should have hidden the site or reported it. By commenting on it or sharing we only gave those wesbites more power and visibility in our timelines. That is our fault and we should be ashamed of ourselves. We should have been sharing real news sites, real information of real value, and not empowered stupidity. Instead of unfollowing people we should have been unfollowing the inaccuracies. We added fuel to that fire. We did that.

The worst feeling I’ve had since Tuesday is realizing that I can’t honestly tell my children that we need to continue respecting the Office of the Presidency even if we can’t respect the man who holds it. I have never felt so devastated as an American as I have this week when I realized that I no longer had any pride in my country. How do I feel pride in a country that willingly elected a man who built a platform on hate? And how do I feel in my countrymen and women who will deny that he did? This man does not represent me or what I believe in, nor does he represent anything I want my children to believe in.

There has been a lot of name-calling through all of this by all  people on both sides. Nobody is blameless. I’ve been called a traitor, a bitch, a whore… everything. I’ve even been called the all-time favorite insult by the alt-right: a cuck. (A stupid word and a stupid insult, as are all insults.) I’ve also been called a “snowflake” who needs her “safe space” — another insult by the alt-right for those of us who have disabilities or who have been raped/sexually assaulted and have triggers — because I’m questioning what my country has become. And I do question my country. I question a country for not batting an eye when the Ku Klux Klan openly backs a presidential candidate and there’s no public outrage over it.

What kind of parent would I be if never reprimanded my child for misbehaving or if I never stepped in if I were to see my child about to do something so dangerous it would impact his development? So to must I be the kind of patriot who would speak up if I my country were to do the same.

Patriotism is more than just idolizing Founding Fathers and believing our country never does anything wrong. Patriotism is more than insisting everything is done just as the Founding Fathers intended or should have intended. To be a Patriot means to be a steward over a nation, nurturing its growth and ensuring its prosperity for all time — understanding that time is not stagnant. Does Government make mistakes? Yes! Because Government is by the people, but it is also for the people — not certain people.

And so do not dare to tell me I’m no patriot for questioning my country. It is my duty as a citizen to question it.

And do not dare to tell me to get over what happened, or tell me to it’s time to move on and be united. We will not move on or be united when we have an administration that does not view the country’s citizens equally. We have a right to be angry, to feel outraged, to feel threatened. I have a right to tame the wind.

And I have a right to be ashamed of my country even if I love it.