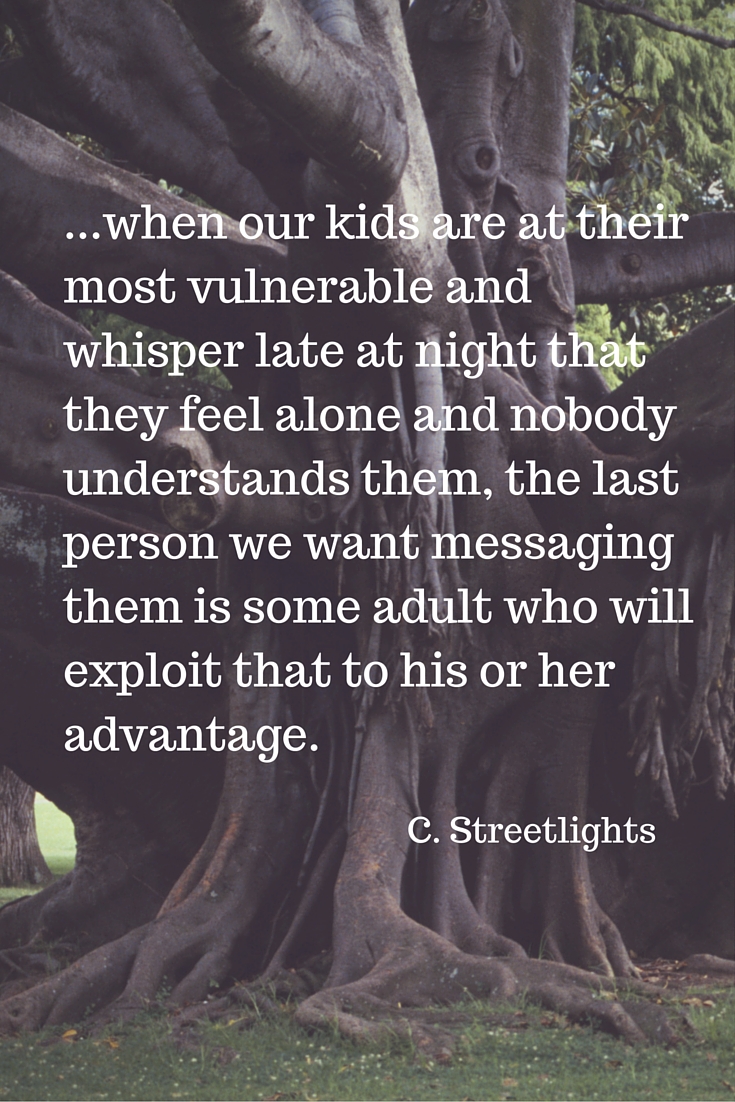 As a mother who insists on staying involved in her children’s lives, I make an effort to read articles that come along warning me about the latest dangers or improvements in the world that will directly affect my son or daughter.  My son, who is fifteen, is growing up in largely different world than the one I experienced for a variety of reasons, primarily because of the social media influence. I don’t shelter him from social media nor do I forbid him from using it, rather I learn all that I can about it so that I can help him navigate it in ways so that he can be better informed in making his own decisions.

So when I come across various parenting articles about the newest apps or networks that parents need to be wary of or, more to the extreme, prevent their children from using, I read them to see if something has slipped under my radar. One such article recently highlighted the usual apps that cause parents concern, with good reason, and highlighted some good pieces of information that all adults should be aware when utilizing social media in a day to day basis: be aware that once something is posted on the internet it becomes public, regularly review privacy settings, do not give out private information, etc.  All the apps listed were those I have already made an effort to become familiar with and most I regularly use except for one: Whisper.

I had heard of Whisper but was not too familiar with it other than it reminded me of the community art project, Post Secret (people mail in a secret written on the backs of postcards). I decided that I would download Whisper and become its newest best friend so that I can better understand what the hell it was.  My son called it my “undercover” project and we talked about it each night at dinner.

First, I’ll explain the basics in Whispering and why, right away, it concerns me as a parent:

Second, there are a couple features of Whisper that bother me as a parent who continuously reminds her son to never turn on the location services for his iPad:

Of course, Whisper knows people want to remain anonymous but people are also naturally curious, right? People want to know what their neighbors might be whispering, or at least guess what their neighbors might be revealing. Once again, though, this feature isn’t available to users unless they make their location available to Whisper. Once you whisper something with your location turned on, your city will be posted underneath your username.

Once I downloaded the app on my phone I planned out my strategy. Since there is no way to track user profile information the only real way I could collect any sort of data was to post whispers at specific times of day and attempt to determine demographic information such as gender and age. I estimated that depending on the types of my whispers, mid-morning responses would range anywhere from individuals who were stay-at-home mothers or father to college students to people in the workplace whereas late night whispers would generate responses primarily from The Disenchanted — teenagers, lonely married people or 20somethings. While there is no way to know for sure, after a month of “undercover” research and data-collecting, I wasn’t too off the mark. Here are some of my whispers and the data I collected:

I first posted what I called my “throwaway” whisper, a whisper to first help me see how it worked and what the app was for.  It is apparent that nobody cares about my secret love for Tinkerbell.

I waited another hour before posting my second whisper designed to see if I could draw attention from a specific demographic: parents. I was shocked by the response I received. As can be seen, I received 303 “hearts” for this ridiculous statement I created about allowing our dog snatch my son’s underwear from the bathroom floor and 19 people replied to it. As I expected, the majority of the responses (89%) were from parents who thought this was hilarious and congratulated me in teaching my son natural consequences.  As always, there were a few dissenting and mean-spirited voices (7%) who questioned my parenting.  These individuals claimed I had no business having children, I was a “piece of shit mother” for not teaching my son how to pick up after himself, and one advised me to kill myself so he would have a better chance on his own. All of these people admitted to not having children of their own. Included in these 7% was another category of people who were more concerned about my dog than my child or his dirty underwear. This last 3% were convinced that I was cruel to all animals and I should have my dog taken away from me.

But what does this mean for my 15-year-old’s safety? I designed a whisper that was blatantly sexual in order to determine what type of responses it would receive. I wanted to see if Whisper was really an environment of honest communication that its designers insist that it is. I posted this whisper at 3:00 on a Saturday morning (profanity edited out): It clearly did not generate the transparent interest like my dog snatching underwear post. However, within 48 seconds of it posting, I received 24 dick pics through my personal messaging. Whomever told men this was a good idea was a terrible liar. After not responding to these (Because what can be said to an erect penis?) I was berated by 16 of the users who sent them to me — unsolicited, I will emphasize — for not admiring or wanting their mythical penises. Numbered with the dick pics, I received 18 solicitations for nude pictures and/or sexting. I needed more data than one whisper, however, so I designed four more similar in tone and posted them at different times on different days of the week.  Each whisper generated similar results, the only posting time that generated less immediate interest was a whisper I posted around 5:30 on a Wednesday evening.

But what happens when a whisper is not so desperately obvious? What if it was a whisper that showed confidence with a little bit of naive sexuality? I needed a comparison. I created five more whispers that were all designed specifically to demonstrate a little bit of vulnerability while at the same time be a tiny bit confident in some way. I posted them at the same times and on the same days.  This is the part of Whisper that bothers me the most.

I first posted this at 3:00 on Saturday morning, not expecting much of a response: I was hearted twice and nobody replied, again not much of a surprise there. Thankfully I didn’t receive any dick pics. However, my personal messaging box was flooded within the first three minutes of this whisper posting with young (or old, who knows) men willing to commiserate with me on the systemic sexism within the sciences. After receiving over 62 messages from men who were far too willing to listen to me complain about the injustices of “the system”, I began to chart how many messages would have to be exchanged before they asked for pictures of the “big boobs” referenced in the whisper. Of the 62 initiating messages, 30 (48%) of them continued conversing beyond the initial “that’s too bad/that sucks/what an asshole” type message sent to me. Of those 30 men, 18 pursued conversation at a shallow and patronizing level, taking the approach that I was too beautiful and intelligent to have to put up with such bullshit, I must have to put up with researchers hitting on me all the time, how am I able to focus on difficult work when everyone in the lab must want me all the time, etc. I began to see a pattern amongst these 18 men. They would talk long enough with me to find the weakness — in this case, it was my irritation about my fictional lab partner treating me like a dumb girl — and then exploit it to their advantage. These 18 men were pretty smooth in their efforts, all utilizing techniques that were first complimentary and then attempted to break this fictional character I created down in ways I hadn’t thought of, such as “It’s okay to be sexy and smart” or “If you’re using your body to get ahead in science, who cares? Women have been held back for too long anyway, you should use any advantage you have!” and even “Having brains and boobs is a like a gift to the scientific community. It’ll inspire men and women.”

The responses and patterns were similar with all the whispers I posted during this time frame which raised my concern throughout the week. When I talked with my son about it he summed it up perfectly as “creepy”.

Here’s my takeaway on Whisper and if it is an age-appropriate app for not only my son but other parents’ children:

I can’t make the judgment call for other kids, but I know I am far too uncomfortable with it for my son to use it and he is actually fine with that decision. He thinks it is pretty lame. (His words.) I think the inability to effectively block users is dangerous and I am troubled that there is no way to search for user profiles. I also feel that it is essentially a pedophile and predator’s playground. I am an adult and am emotionally savvy enough to know when someone is trying to exploit my emotional weaknesses.  Teenagers are not. I don’t care how hard and long they argue that they know better or won’t do certain things, adults who prey on our kids will always know more than they do.

I remember having a conversation on Facebook with someone about cell phones and when it is the right time for kids to have cell phones. She, like so many others, tossed off the answer “Well, I trust my kids so I don’t really care what they’re doing on their phones because I  know I can trust them.” I think that it is fantastic that her kids are trustworthy and she has developed such a great relationship with them. I hope we can all say the same things about our kids. Apps such as Whisper are not an issue of trust. It is an issue of basic child development. While our kids do live in a time when they are more technologically aware and developed than we were, they are still emotionally and mentally developing at the same rate as we were. And I can assure parents that when our kids are at their most vulnerable and whisper late at night that they feel alone and nobody understands them, the last person we want messaging them is some adult who will exploit that to his or her advantage.

I won’t tell anyone what to do with their kids. But my children won’t be whispering to strangers on the internet when they can talk freely to me.

2 thoughts on “If You Whisper, They Will Answer”