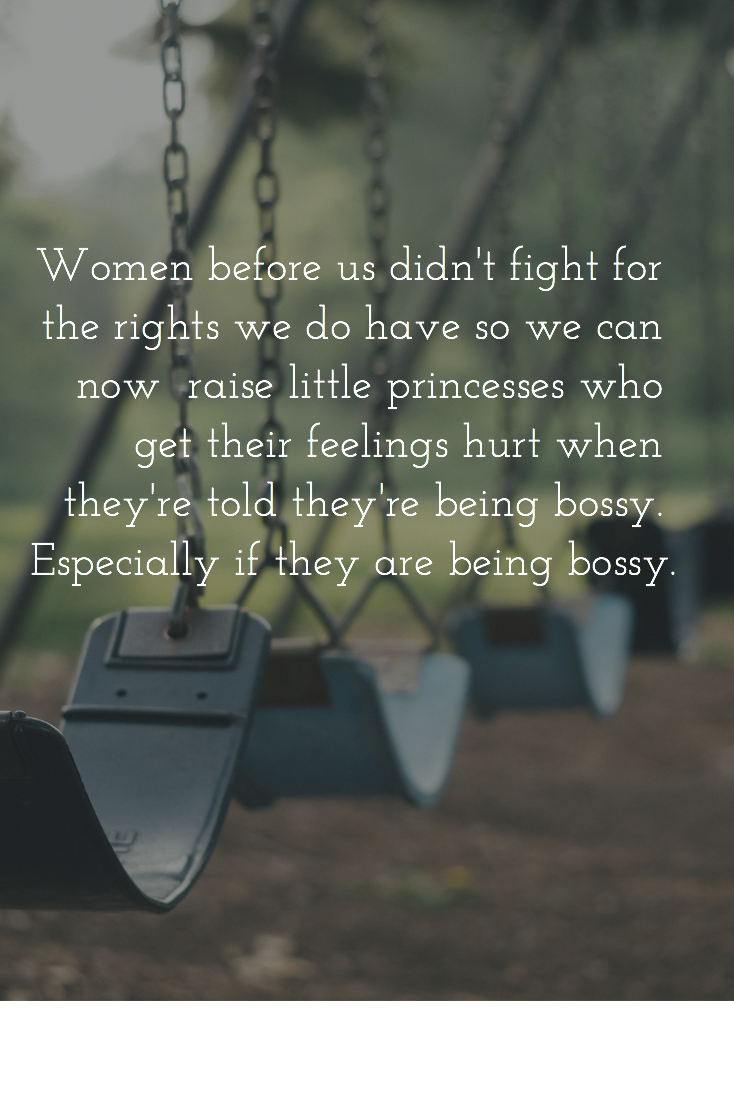 We’ve all seen the “bossy” meme that’s made the rounds on social media. You know the one. It usually shows a woman (or maybe a young girl) with arms petulantly crossed and scowling. The caption will read “I’m not bossy, I have good leadership skills!” We laugh and click “like” or “share”, perhaps we’ll comment about knowing someone “exactly like that!” because memes are the great unifier.

Somehow over the course of a couple years “bossy” has joined the list of words that are no longer acceptable to call little girls. If we tell a girl she is bossy we are now shutting them down. We are telling them that their voice is not valuable. By saying they are bossy we are telling them they won’t be welcome in the corporate offices ore the universities. Bossy girls aren’t allowed to lean in. We’ve been asked to ban bossy. If we ban bossy then we will close the confidence gap*. If we buy the totes and stickers from the Ban Bossy website then girls we become assertive. We are told that when little boys are assertive we call them leaders but when little girls are assertive we call them the B-word: Bossy. We are reenforcing the gender gap right there on the playground.

I call bull shit. Leadership has nothing to do with what boys and girls are called on the playground, but I’ll get back to that.

When boys are assertive they are generally called bullies, not leaders, because boys statistically tend to bully more overtly and physically. Aggressive behavior like being dominant in a schoolyard, maneuvering kids out of the way in a playground, stealing a ball and then playing keep-away, intimidating younger kids through size or presence to get what they want is all bullying behavior — not leadership skills. I wouldn’t even call it being assertive; it’s being mean. When boys are telling other kids what to do and being domineering, ordering people about it’s being bossy. If girls are being aggressive, they too, are being bullies — though statistically girls will bully in ways that are less observable.

I tell my daughter she is bossy when she is, in fact, being bossy. Because guess what? She is bossy. She will sit on her little sassy rump and order me or her big brother around, telling us what to do and how to do it, and what to say when we do it. I don’t care how many t-shirts the Ban Bossy website sells — this is bossiness, not leadership. I have no problem at all with someone telling her, “Hey, quit being bossy — even if you are a girl.”

We are doing no favors to the women’s movement and to our daughters by painting a word like leadership as something than it isn’t. Leadership is not sitting on our asses and setting our minions loose to do our bidding. Feminism is about raising future women who will be strong enough to do the work that we couldn’t finish in our generation, and that means telling them if they’re doing it wrong. Because guess what? Women before us didn’t fight for the rights we do have so we can now  raise little princesses who get their feelings hurt when they’re told they’re being bossy. Especially if they are being bossy.

On Point in the Playground: Teaching Leadership

Effective leadership is not sitting in the sandbox telling people what to do, and it sure as hell isn’t making sure the same amount of people are being labeled as “assertive” or not. Nick Petrie, a senior faculty member of the Center for Creative Leadership in Colorado Springs said in a December 2011 study, “There is a transition occurring from the old paradigm in which leadership resided in a person or role, to a new one in which leadership is a collective process that is spread throughout networks of people. The question will change from, ‘Who are the leaders?’ to ‘What conditions do we need for leadership to flourish in the network?'” (Future Trends in Leadership Development)

If we really want to help our girls to grow up to become effective female leaders, women who lead not only society but continue the fight for gender equality, then we need to do through fostering real and genuine leadership opportunities for them while they are young and not by a shallow assumption that removing an adjective will do it. If we don’t teach our daughters what real leadership is than all we are doing is teaching them that they can continue being jerks at the playground but they’ll be praised for it by being called assertive leaders.

How do we help our daughters learn effective leadership skills? Matt Mayberry, writing for Entrepreneur, identifies three common traits he feels all effective leaders possess: humility, positive energy, and the ability to lead by example. I agree with him. He says leaders should think about “those they are leading and rarely about themselves […] Top employees never want to work for or be associated with employers who are full of themselves.” Raising a daughter who happens to be very high-energy and on the go myself can be challenging and exhausting. However one of the many things I love about her is how she easily helps other kids who need help. She and I will do things together calling it teamwork. Because of this, she will tell kids at preschool or at the park who needs help, “Let’s use teamwork!” This is the kind of excitement and positive energy that will someday help her become a strong leader in whatever capacity she chooses to use her skills in. I’m excited for her.

I know that people have good intentions in wanting to close the achievement gap between men and women. I appreciate those individuals who keep their eyes on statistics, watching young women working so hard to catch up on the same opportunities as young men. To all these stalwart watchpeople in the fight for equality, I sincerely thank you! I want to make your load lighter — I don’t believe “bossy” needs to be on your to-do list. When it comes to fighting for equality on the school yard, let’s focus our efforts on sexual harassment and Title IX. As for the playground, let’s teach worry less about “bossy” and more about giving our kids are authentic leadership opportunities.

5 thoughts on “Go Ahead and Call My Daughter Bossy: Why We Miss the Point in Playground Feminism”