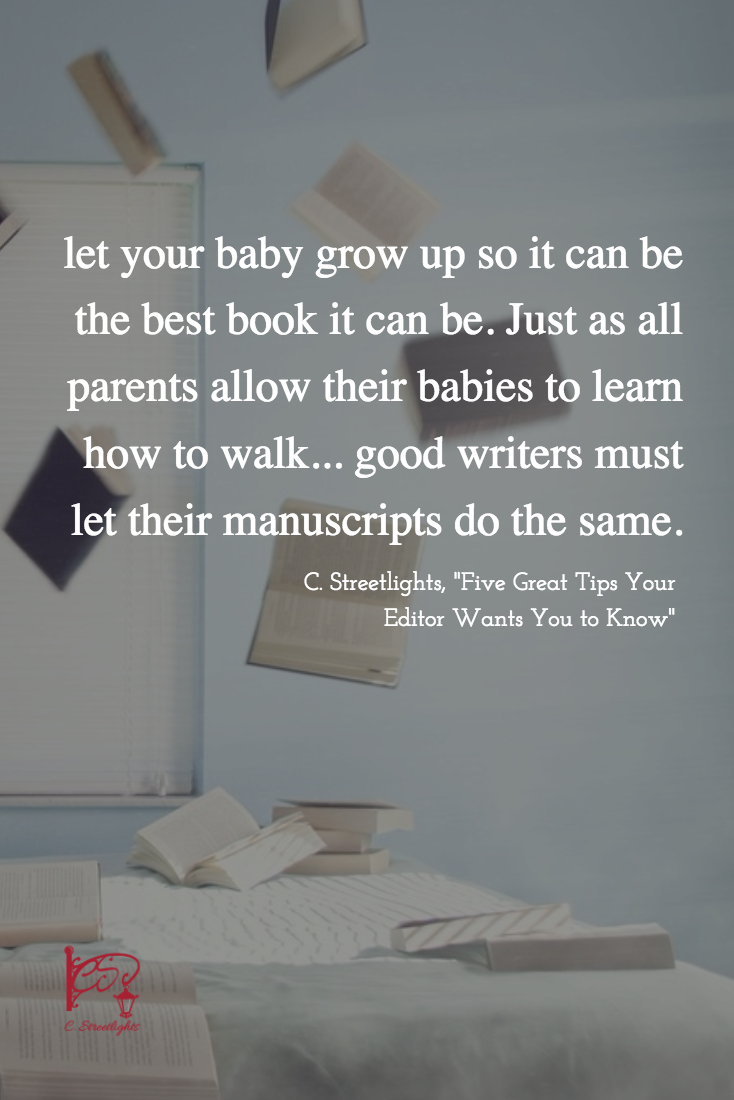 Like many editors – or proofreaders, graphic designers, or publicists – I’ve learned a few things along the way that would benefit their clients. And while I mostly work with new authors hoping to publish their first manuscripts, I think the following tips are helpful for anyone who’s finishing up their first drafts.

Use a Professional Editor

This seems like an obvious tip to follow, yet it isn’t. Many first-time writers, and even seasoned writers, think that the expense of a professional editor is one they can cut, especially since they’ve used beta readers who’ve given them what they feel is excellent feedback. Or, it could be that first-time writers are actively engaged in writing groups and their manuscripts have gone through extensive rounds of peer reviews through their writing groups. (These are real life examples, by the way.)

First, beta readers are excellent and I certainly recommend them. They will give writers worthwhile information and catch errors that many editors and proofreaders will often not see. A neighbor of mine previewed a copy of Tea and Madness before it went to print, and due to her years of experience working as a school librarian, caught a punctuation error on the back cover that changed the entire meaning of a sentence. Considering how many sets of eyes looked over the back cover – including mine! – I was so grateful for her experienced eyes. However, beta readers can’t be your sole source of editing. They can give you feedback on how the writing flows, if the narration is enjoyable, if the characters are believable, and so forth. They’re job is to be “pretend” readers.

Second, I don’t discount writing groups, either. What can often happen with writing groups, however, is an experience much like the phrase “too many cooks in the kitchen”. I once edited a manuscript that was an exciting fantasy tale that would be an entire series but it has still not gone to print. The author became so overwhelmed from sending me five chapters to edit before forwarding those same chapters to her writing group to then peer review. She had so many markings on her manuscript at the end that she didn’t know where to go or who to believe.

A professional editor absolutely has to be an expense a writer (especially a first time writer) needs to budget for, and then the writer must communicate directly with that editor. An editor will have the experience needed to go through the manuscript, notate changes, and then answer your specific questions.

Communicate With Your Editor

It is really important to set up certain terms when you first contract with your editor that go beyond money and deadline. One of these has to do what is the most convenient way to communicate with your editor. Some editors, like myself, prefer communicating once the work is complete unless there is an immediate question or concern regarding the manuscript. Others have no problem with their clients communicating with them throughout the entire editing process. I recently had a client who wanted to have weekly updates about her editing because her first editor burned her by accepting to edit the manuscript only to abandon the work almost a year later. If you’re seething over not hearing from your editor and the terms of your contract was to contact you weekly, than that is definitely a problem. On the other hand, if you’re upset about not receiving a weekly update, and you never stipulated such, than that is something you need to revisit with your editor.

Many times a conflict between an author and their editor occurs simply because there has been a break down in communication, and generally this could have been avoided from the beginning if both parties were clear about the expectation for communication was to begin with.

Some other important points that should be considered in terms of communication would be deadline changes, issues that might come up in editing that need immediate attention, or if a client has also contracted for writing coaching. I’ve also contracted to have one or two video conferences with clients – one conference before I begin editing in order to go over any specific questions or expectations from the client, and another after I’ve returned the first draft to go over any questions.

Communication is absolutely vital between a client and their editor.

I can’t stress this enough: know exactly what you are getting and insist on a contract.

I can’t speak for all editors; I can only speak for myself and those I know, but we are honest and clearly stipulate what services we provide in our editing contracts. My contract will generally include the following:

I strongly encourage writers to only use an editor who will give them an itemized contract. There are extenuating circumstances, of course. Services will often be utilized on a quid pro quo basis in the publishing business. Unless this is the case, writers should have a contract and insist on one; they should also insist on either signing a modified contract or having a contract amendment if something were to change.

A contract helps to eliminate any confusion as to what expectations there are between the editor and the writer. It helps establish the necessary professional boundaries between both entities, and protects both from any miscommunications. Does the writer only want a manuscript evaluation? Great, that will be itemized in the contract. If the writer wants substantive line editing, that will be itemized. Lines are clearly drawn.

We Know It’s Your Baby

You’ve worked for countless hours on this manuscript and labored over every word. It might be your first book and you’re feeling insecure about letting someone else read it. To think someone will go through and edit, removing words – or whole sentences! – move things around, or tell you that whole sections need work might make you feel physically ill.

We get it. We understand! Many editors, like myself, have been through the same experience. When I submitted Tea and Madness and then Black Sheep, Rising, I didn’t want to open my email for days. I can’t think of any writer who has ever felt so confident in his or her work who hasn’t felt pangs of insecurity. Even now, as I prepare each blog post, I still feel inadequate.

A good editor will know that a first-time writer will feel timid in handing over their Precious. However, and this is a big one, it is vital that you let your baby grow up so it can be the best book it can be. Just as all parents allow their babies to learn how to walk by letting them scoot, crawl, toddle and fall before walking without falling, good writers must let their manuscripts do the same. Nobody with a lick of sense will berate a parent when a baby is learning how to walk by saying, “You idiot! Why are you letting your baby learn how to walk? Look how it’s falling!” An editor won’t do that either.

Let your manuscript baby do the same thing and don’t let your nerves prevent your baby grow up.

With that said, and this is hard one, don’t let your ego get in the way. It’s hard to accept this and become one with it, but your manuscript is not a reflection of who you are as a person. It is only one piece of work and not you as a whole. If your editor removes whole pieces of your work it is not the same thing as saying, “You know what? Your kidney sucks so I’m taking it out.” We are just helping your manuscript be the best it can be. I recently removed approximately 40k words from one client’s manuscript, and I can assure everyone that not one of those words was needed.

We will take care of your manuscript babies, we promise. But you have to raise them yourselves

Please trust your editor. I can’t speak for all editors but I can speak for those I know and, of course, myself.

We didn’t enter the business because we want writers to fail. We want writers to be a success! As a retired English teacher, I know and have seen firsthand what great books can do for students and how they can spark a new lifelong love for reading. There is so much power in literacy. Together, authors and their editors can truly change the world by improving both literacy and alliteracy.

With that said, please understand me when I say, “Don’t fight your editor on every change or suggestion.” Editors bring so much outside perspective to your manuscripts that you won’t be able to have, not because you are a “bad writer” but because you are too close to the manuscript to be objective. Simply put, you’re biased to the writing. Editors, because they don’t have the same invested interest to the work, are able to look at the manuscript without the same blinders on. We can help you avoid potentially culturally or socially offensive content, or alert you to issues that might arise in certain target demographics, or even just flag language that might mean something different in another region of the country. If an editor does this, please listen to their guidance as it is meant to help you and your book to be successful, and even help you avoid possible lawsuits.

Readers won’t perceive descriptions as accidental even if the author had no intention to offend or infringe on copyrighted material, for example. One client described The Devil in such a way that made me uncomfortable because I inferred him as having obvious and grossly stereotypic African-American characteristics. After having several friends of varied backgrounds read the same passage confirm my impression, I advised her to remove the description or use a different way to characterize him. Thankfully, this was an easy remedy of what could have been a possible controversy.

I won’t give many details due to confidentiality, but I currently have a client who is fighting my partner and me on every suggestion and edit. Every single one. Needless to say this project that should have been done in August of 2016 is still not done. And I have almost started drinking.

Obviously there are more than five valuable tips that editors wish writers would follow, but these are the five that I wish potential clients would embrace in the most beautiful and transcendental of ways. Writing is hard enough on its own, trust me – I know that first hand; don’t make it harder on yourself by thinking you have to do everything alone. 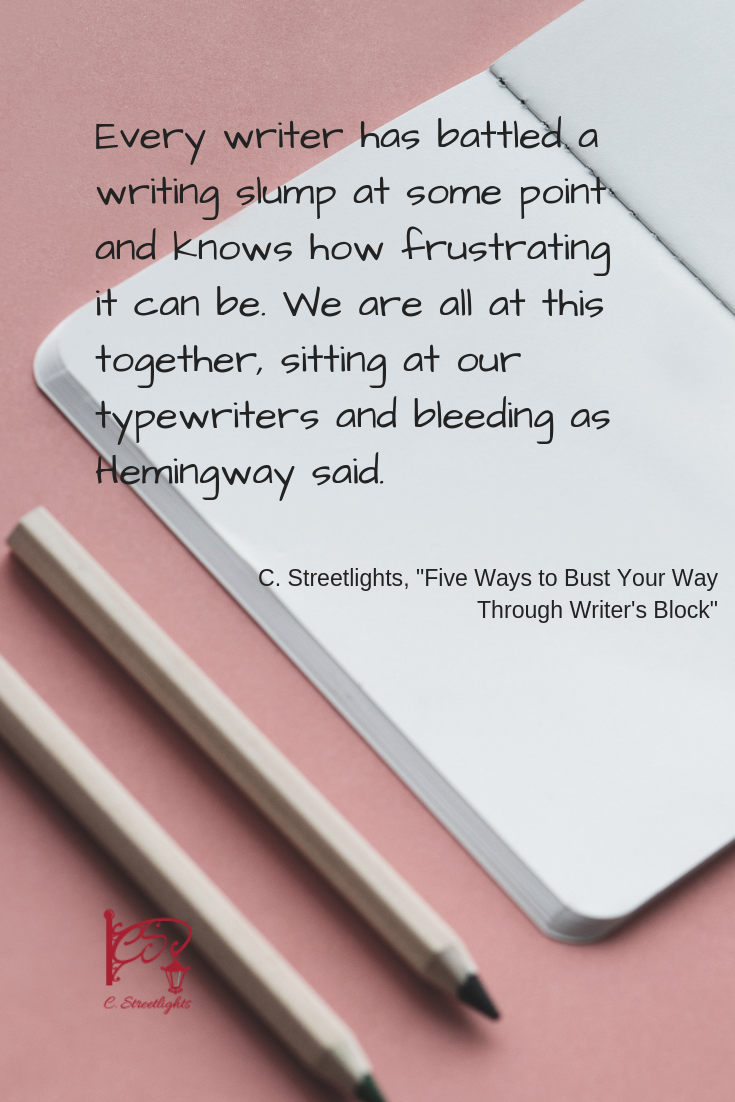 Five Ways to Bust Your Way Through Writer’s Block
November 14, 2018 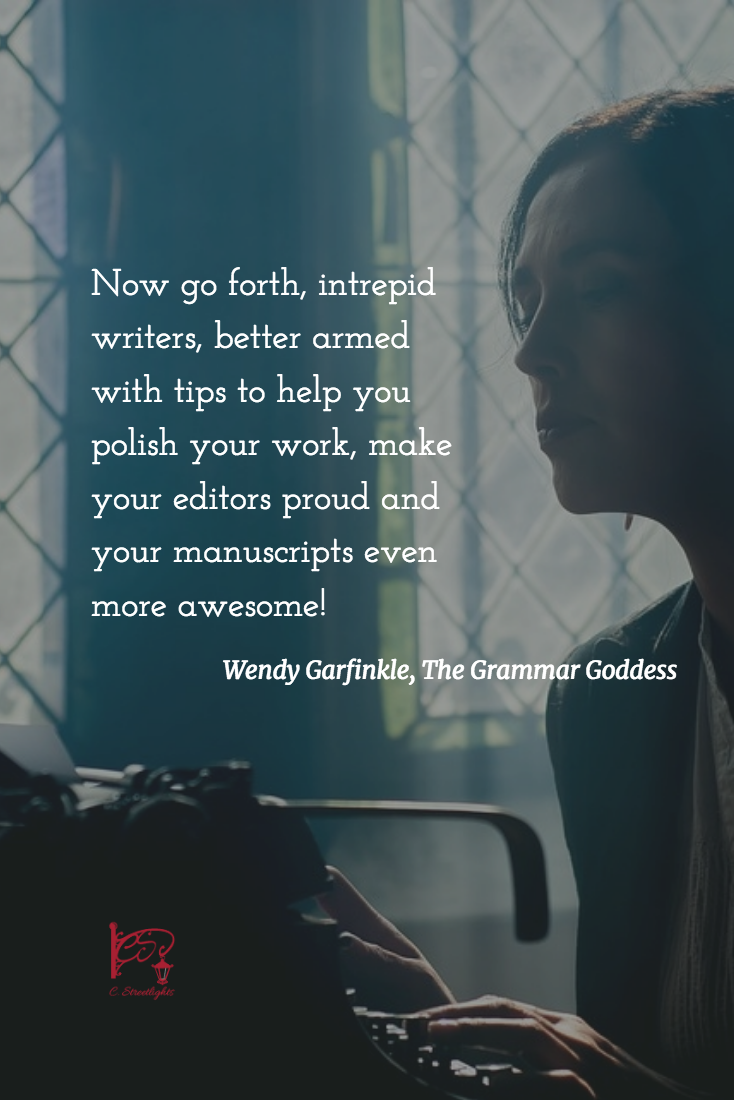 This is the Reason Editing Your Work is a Bad Idea
February 4, 2017