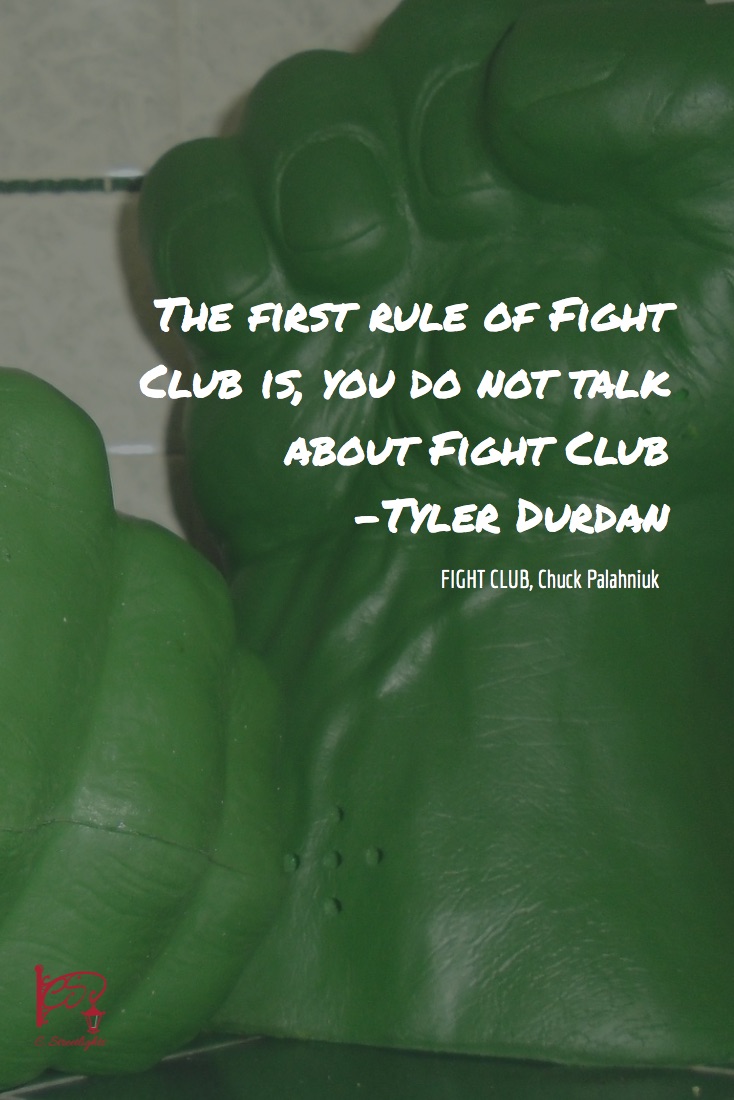 The first rule of Fight Club is, you do not talk about Fight Club

Fight Club by Chuck Palahniuk came to mind recently along with its specific set of rules while I was talking with a friend about her sister’s battles with depression:

#1 – The first rule of Fight Club is, you do not talk about Fight Club.

#2 – The second rule of Fight Club is, you DO NOT talk about Fight Club.

#8 – If this is your first night at Fight Club, you have to fight.

The club itself is more than just the clichéd idea of fighting back against society blah blah blah. Fight Club later evolves into Project Mayhem, an anarchist effort to overthrow the country’s social order. Project Mayhem is the literary equivalent of what would become the 98% and the Occupy Movement. I could write a whole post just on comparing Project Mayhem to the 98% and the Occupy Movements. Instead, I am more focused on what Fight Club means philosophically in terms of depression and other mental illnesses. The underlying concept of Tyler Durden’s Fight Club is the idea that through losing everything — through the destruction of all — can something really begin. Unfortunately, hand in hand with this in Fight Club is the danger in trusting the wrong people and keeping silent through pain and turmoil.

Tyler Durden, the narrator’s alter ego, says, “Only after disaster can we be resurrected”. His views are not only bleak but are also isolating. Similarly, he says, “It’s only after we’ve lost everything that we’re free to do anything” and “without pain, without sacrifice, we would have nothing.” These points of view aren’t necessarily bad points to have in general, however they are not healthy when applying them to depression and mental illness specifically. We do have to rely on others for that resurrection or that chance to start over. This can not happen alone, nor can it happen singularly.  We do go through pain, and sacrifice much, and experience a great deal of sorrow — this is all true. But this doesn’t mean this is the only way we will gain some sort of ‘freedom’. Nor does this mean will we gain a true reward. A person who experiences depression doesn’t need to hit rock bottom first or feel they’ve reaches a disaster point before they can begin rebuilding their lives. This kind of false messaging that society perpetuates and Durden gives a voice to sends a message to those who face depression everyday that help is out there but they can’t have it until they’ve suffered more. People who struggle with depression are not tragically sad every single day. We are not suffering emotionally and obviously every moment — to tell us “It’s only after you’ve lost everything that you’re free to do anything” is dangerous. It tells us, “You aren’t depressed enough to get help.”

Everyone has a burden. And everyone has a story to tell. But we can not go through these trials alone, and we can not go through them in silence. To “not talk about Fight Club” is counter intuitive to what we should be doing. We can not be resurrected, like Tyler says we can be, and we will not be free to do anything because silence ultimately imprisons us.  Even Durden knows that silence and isolation isn’t natural by attending support groups that he has no connection to: “If people thought you were dying, they gave you their full attention.” Those of us with mental illness will say we don’t want to talk about it or that we want silence. And this might be true sometimes. However, long term silence will be deadly. Durden learns this lesson the hard way when he recognizes the monster he created in Project Mayhem before his own schizophrenia.

Just as the narrator learned at the end, Tyler can not be trusted… even if that was one of the rules of Project Mayhem. When we know that we or someone we love struggles with depression or other mental illnesses, there are no rules. There is only doing what is best which is not expecting people to do things on their own or staying silent.