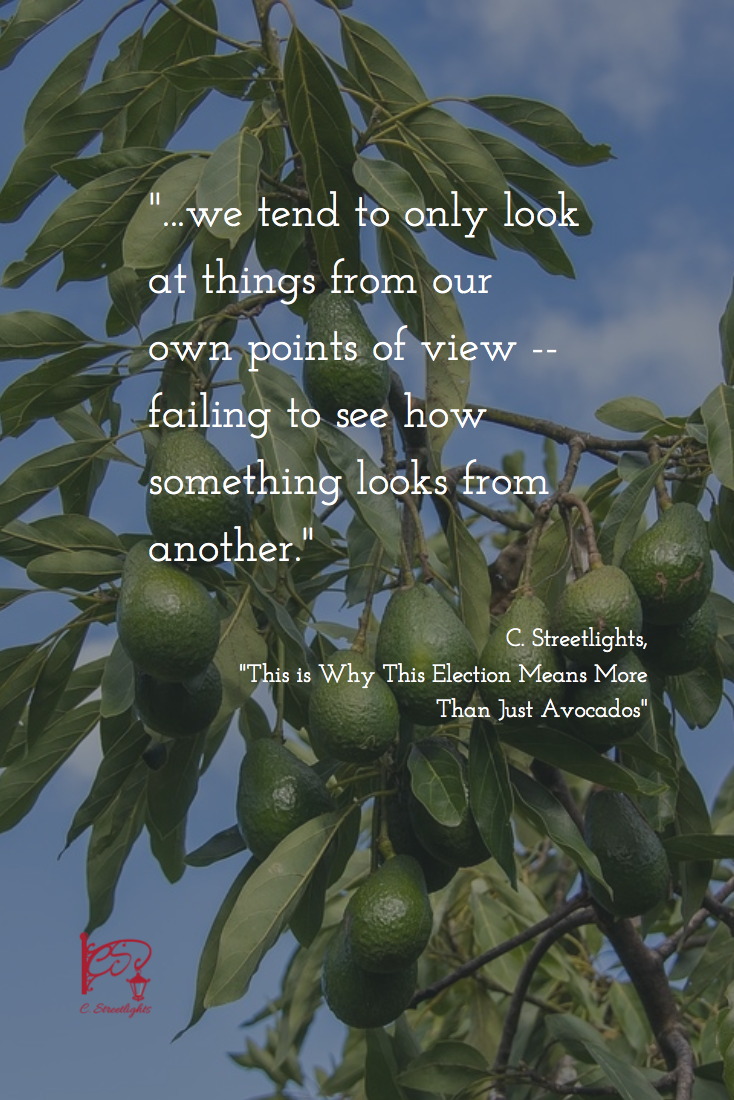 The only real reason why I even remember Jim is because of the tree with avocados in his backyard.

He lived across the street from us my entire life, and I don’t remember much about him. Jim and his wife lived in the same green house that never changed even when the neighborhood changed around them. The gingerbread styling of eaves remained the same, the screen door remained the same, everything remained the same — only the people inside grew older.

Avocados were common in Southern California and I wish I had valued them more than I did back then. Specifically, I wish I had the avocado convenience at California avocado prices. Many people had avocado trees but not many actually bore fruit, but Jim’s did. He had so many avocados he didn’t know what to do with them. He had avocados falling to the ground and rotting.

What a waste of avocados.

Eventually he began to ask his neighbors if they would like some, and many took him up on his offer until they found out they would have to come and pick their own avocados. Picking avocados is similar to picking apples in that you need to use a long pole with a small clawed-basket at the end to grab the fruit, thus gently dropping the fruit into the basket. It’s not hard work but can be hassle after some time because it can be hard on the arms.  My father took Jim up on the offer and every once in a while we would walk across the street with a brown paper bag and pick some avocados.

If you’ve never had fresh avocados straight off the tree you are pretty much failing at life.

This was our ritual with Jim for perhaps a summer. Maybe two summers, I can’t quite remember and it doesn’t really matter. What does matter is the last trip across the street to Jim’s house my father and I took. We were in the backyard, picking the fruit, and I was raking up the rotting avocados. Jim usually would come out to chit-chat with We didn’t think anything was out of the ordinary when Jim came out of the house that afternoon to talk to us as it was something he often did, but something was different about his demeanor that day. He confronted my dad and simply said, “I hope you leave some on that tree for us!” and stomped back into his house. My father and I were stunned, and my dad was angry. We left right then and never returned. My dad fumed for weeks after that, and really if you were to ask him today he would still be mad.

I had mostly forgotten about the avocado incident. Every once in a while it would come up and my dad would bluster over it and it would be forgotten just as quickly as it had been brought up. Yet I’ve thought about Jim and his wife recently for several reasons. Some more important than others.

Mostly, I’ve thought back to this experience and reflected how not only complicated human relationships are but also how tenuous they can be. Far too often it can be a small and inconsequential misunderstanding that can cause an entire shift in a developing relationship. And I’ve also thought about how complicated something as simple as gratitude should be in our lives. Yet, as is usual, we tend to only look at things from our own points of view — failing to see how something looks from another.

My father always thanked Jim for the avocados, but Jim never thanked us for tidying up under his tree or helping him keep the tree healthy by picking the fruit. My father never recognized that Jim was slowly declining due to dementia, and Bill never realized that my father took very few avocados in the first place.

And it never occurred to Jim’s wife to let him know that she was picking extra avocados to give to her friends at the community center.

This election season has been a lot like my experience with Jim and his avocados. We, like Jim, assume we know everything that is going on with our avocados because we see them disappearing and we only have ever seen one person taking them, therefore we target that person, yet we never think to stop and ask questions about what else could be happening to the very tree that is bearing good fruit and is remaining healthy. Instead we are accusing good neighbors and alienating them, causing them to break ties with us.

Instead, like Jim, we never stop to look and observe what is happening in our own backyards by people in our own homes.