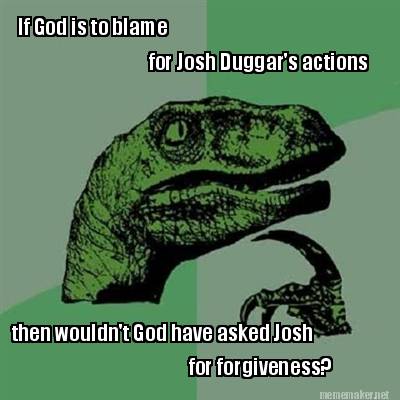 My phone has been chiming from the moment news of a young teenaged Josh Duggar acting “inexcusably for which [he was] extremely sorry and deeply regret[ed]”. My Facebook notifications were flooding with tags to various news articles almost as quickly as texts from various people — all wanting to know my opinion on the Duggar situation.

Everyone has something to say about the Duggars and everyone wants to know what everyone else has to say about the Duggars, I suppose. I haven’t really wanted to say much about them. I haven’t wanted to contribute to the chaos, the endless static of voices that seem to fill the air with no purpose other than to cause friction. So I’ve waited. I recognize that I am a rape and sexual assault survivor but I am a survivor of my experience, not their experience.  My experiences are valid and authentic enough to contribute to the social conversation.

Since the time that Josh Duggar responded to the police report regarding him molesting his sisters, I have been disgusted by the Facebook posts and Twitter feeds. While most civilized people follow the unspoken rule of not blaming children in their own sexual abuse, there was still a horrifying amount of blame deflection spewing around the net.

I will be explicit in this:

While various systems failed Duggar’s victims, Josh Duggar is the sole perpetrator who is to blame of sexual abuse and molestation.

Turning the conversation away from Josh Duggar and towards the Republican Party, Mike Huckabee, birth control or abstinence, God, extreme Christianity, or if the media is “re-victimizing” the young women does nothing to advance the perception that perpetrators abuse because they are unable to control their actions.

Let me repeat that:

By refusing to allow Josh Duggar to hold the responsibility in the social conversation we continue to advance the perception that perpetrators abuse because they are unable to control their actions.

A doorway’s threshold splits once the abuser chooses to abuse: one threshold is for the abuser to walk through and the other is for the victim. The thresholds both lead to two different worlds even if they both began from one single door at one moment in time. It could very well be true that Duggar asked God to forgive him and he received some sort of redemption in his mind. And it might also be true that his victims have forgiven him. It can also be true that Duggar’s feeling of forgiveness from God can be a completely singular experience separate from his victims’ feelings towards him. Why? Because once the abuser and the victim walk through their own separate thresholds, their experiences are no longer personally connected.

And our collective understanding of what victims need is not contingent on what specifically Duggar’s victims have or haven’t done. What is more important is that we recognize that our national conversation become more focused on eliminating statutes of limitations, destigmatizing what it means to be a sexual assault survivor, and to eradicate rape culture from accepted forms of entertainment.

Finally, we have no choice but to accept that our media and entertainment obsessed culture has done nothing but grotesquely stuffed a Pantheon full of people we watch with the sole purpose to witness their self-destruction. With delight we sneer at their failed relationships, pick apart their clothing choices, laugh at their children’s names, or compare how much weight they’ve gained. Any sense that their life might be different than ours, but not in the lavish obscenely wealthy way, then the part of the Pantheon reserved for circus freaks grows a bit larger. The Duggars have been no different for us. The moment they allowed cameras in their home it was only a matter of time when objections to their large family and Christian ways would make them targets. While nobody, or hardly anyone, will admit it, the police report on Josh Duggar has been a political gift to those who insist that conservatives are nothing but hypocritical perverts — after all, the most conservative family was hiding a child molester so it must be true.

Everyone has completely lost their damn minds.

Until we recognize that extremist viewpoints on all sides of every spectrum will destroy our civilized society, we might as well accept that we are 320 million and counting in Duggarville.