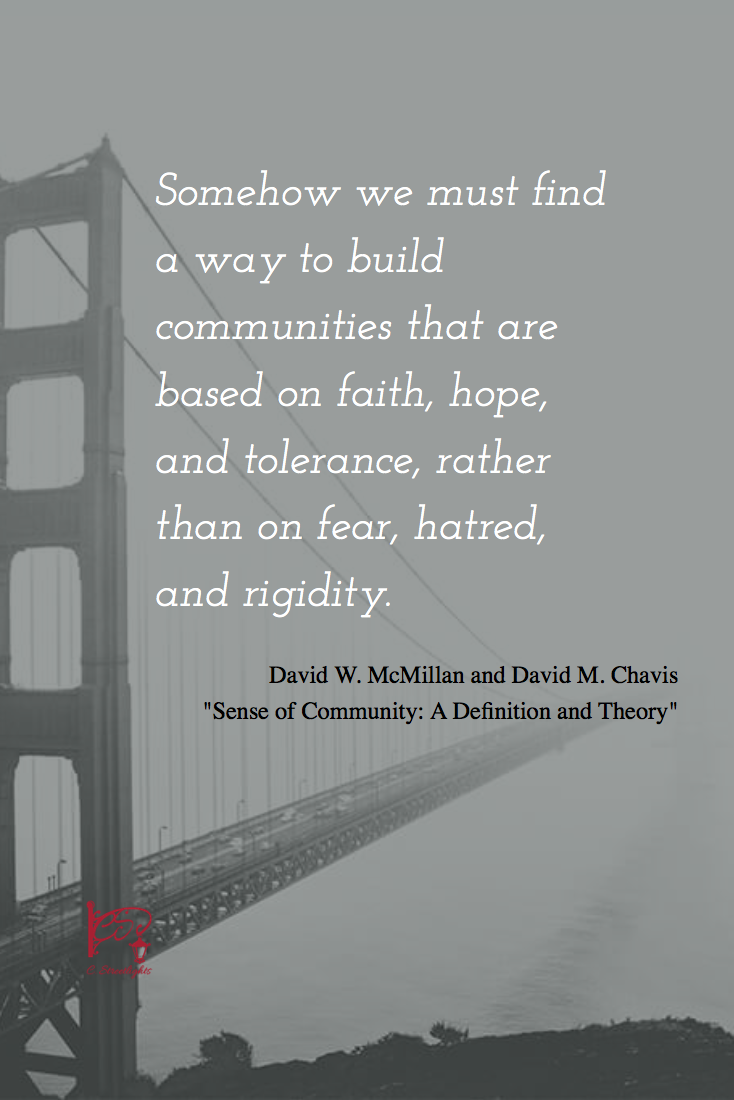 My concept of community has evolved throughout certain periods of my life. I was naive enough when I was younger to believe that if I were loyal to my community than that loyalty would be returned.  Whether this “community” was my school, work, church or literal community, it didn’t matter to me, I thought that if I invested my time or energy to these entities than I would have a “village” to surround me.

What happened then was an enormous construction project complete with traffic cones and diverted traffic. Still, there were potholes and continuous repairs until there some semblance of completion appeared in my life.

Once the dust settled and the crews went home, this is what was left behind:

The realization that community is not a group of anything at all.

It’s not just me.

Social psychologists David W. McMillan and David M. Chavis of Vanderbilt University formed what is now widely accepted as the “sense of community” theory of how communities work. The theory can be summed up in this way:

I felt emotionally shattered after my own group network was more or less destroyed at the end of 1999. I was convinced that my family and I were better off alone and disconnected from anyone who wasn’t related by blood. It wasn’t until a few brave and persistent individuals finally broke down my walls that I learned how to trust people (and myself) again. McMillan and Chavis theorized that emotional safety is an important factor in creating a sense of community because “[m]embers will have a history of experiences together and […] there will be more experiences together in the future.”

I’ve come to realize that by being aware of others around me that community naturally happens simply because I am less focused on me and my problems and looking instead for ways to help others.  Community is only strong if it is built by people first.  And people are only a benefit to its community if they know they are seen as individuals important enough to be noticed. All of us have a need to feel connected to someone and to some group in some way, and when we recognize the responsibility we have for not only ourselves and actions but also the responsibility for each other, that’s when we can truly begin to build a strong network of communities.

2 thoughts on “Community is all about me. Seriously.”