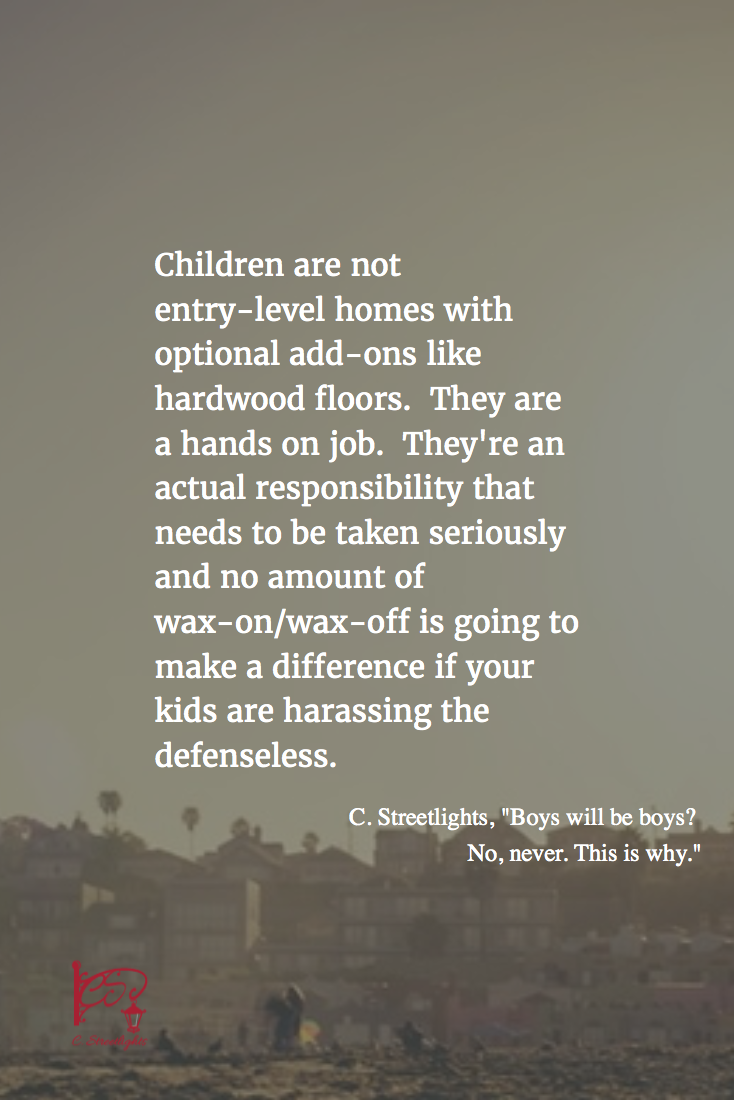 Children are not entry-level homes with optional add-ons like hardwood floors. They are a hands on job. They're an actual responsibility that needs to be taken seriously and no amount of wax-on/wax-off is going to make a difference if your kids are harassing the defenseless.

I encountered many poorly behaved boys and girls, and even worse parents, in my years of education.  It is, as they say, an occupational hazard.  I do like to think that most people know how to adhere to the very basics of human decency, the first being “treat the elderly with kindness and respect.” This isn’t always the case, though, and I recognize that. When the indecent cross path with my family or friends, you can bet my temper will come out in technicolor and surround sound.

My grandmother, an 81-year-old British woman who survived the Great Depression, World War II, and an abusive drunk of a husband, is being terrorized by a group of 9-year-old boys.  It’s true. These angelic boys, according to their mothers, are picking on an old lady.  Isn’t that something?  Do you know what my son was doing when he was 9-years-old?  He was playing with Legos, Transformers and loved learning about bugs.  He was not antagonizing old women by shouting out their first names over their fences while jumping on the trampoline. These fine young men, are just innocent little boys — says the mother.  She’s already told them to stop sliding off her shed’s roof and she knows for a fact that her son and his friends are not doing backflips over the fence and into Grandma’s yard anymore.

I wonder if the other boys’ mothers — who are supposedly her friends — know how quickly she threw them under the bus when she defended her son as being the most well-behaved while blaming the other boys as being more rowdy, especially — she pointed out — the new kid since she doesn’t have a ‘read’ on him yet, she explained. But, she did assure me she would group text all the other mothers immediately and let them know how their kids were behaving. And I believe her.

I believe that by the end of this group-text conversation these mothers will convince themselves that it is a reasonable expectation for Grandma to be fearful of being in her own backyard and be anxious of being hit with a flying ball, shoe, dirty sock, or even several bags of  papers.

These poor, defenseless children are only nine after all! There is absolutely no reason at all they should have to have any consequences, her husband explained to me. Because “This is just what boys do.”

I repeated, “Is this really what boys do?  Do they strip their shirts off just so they can shout at an 81 year old woman, ‘Look at us, we’re naked?'”  Gee, Dad, maybe that’s what your boys do.

What I wanted to ask him, but my husband calmed me down, was:

Let me ask you this, Dad: When these boys are older and feeling up girls without consent, will you respond with, “This is just what boys do”? This is another way of saying “Boys will be boys” and that is not acceptable anymore.  Further, Dad, you should be embarrassed to know that your son — no matter the age — is treating a woman in this way.  And your wife should be embarrassed that you aren’t ashamed of your son’s behavior.

But of course this is symptomatic of a larger issue because dad, washing his sassy black car when we walked up, couldn’t be bothered to  introduce himself or his wife when she came outside.  It can be just so hard to be an Us in a world full of Thems, especially when the Thems actually expect some sort of respectful behavior and there are water spots drying on black cars. Parenting is more than just acquiring the offspring and house to shove them in.  You need more than the necessary and unnecessary items to go along with the job.  Children are not entry-level homes with optional add-ons like hardwood floors.  They are a hands on job.  They’re an actual responsibility that needs to be taken seriously and no amount of wax-on/wax-off is going to make a difference if your kids are harassing the defenseless.

Boys Grow Up to Be Men Who Are Still Boys

Didn’t we recently get smacked in the face with this? How collectively horrifying was it when the Stanford rape trial ended with a rapist being found guilty on three felonies yet received a mere six months that will result in only three months served. The public was outraged, rightfully so, with Dan Turner’s letter lamenting over the tragic change in his son’s life — the poor kid can’t even enjoy his steaks anymore —  “a steep price … for 20 minutes of action”. Just think: this poor, sad rapist was a little boy once, Dan Turner. Where were you?

And so, I recognize these darling cherubs are only 9-years-old.  I heard these parents tell me so the first dozen times you told me. I hope they heard me the first time when I said I notified the local police department about the entire situation when I asked their advice on how to approach the kids’ parents. It’s probably an unfortunate choice on your part to have been so rude in not having the conversation inside your home after all.

Consider this, Dad, when you ask me (again) “You know they’re only nine, right?” you better have a response for when I reply, “Do you know how old she is?” Because I assure you, 81 years will beat out 9 any day.  I have no respect for a man who can’t seem to find the ability to raise his son to treat the elderly with respect.